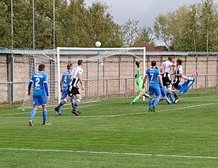 After a tepid start, Flint began to assert some control on proceedings and looked the more dangerous side. On 8 minutes, good defensive work by County's Dan Summerfield blocked a goalbound shot, and visiting keeper Matthew Turner, making his debut on loan from Leeds United, collected comfortably. Then Callum Bratley had a sight of goal from the edge of the box, but placed his shot wide.
The visitors were handed a huge let off on 16 minutes, as the normally reliable Mark Cadwallader inexplicably failed to find the target from just a few yards out, somehow managing to fire over with the goal at his mercy. Flint continued to pile on the pressure, and just before the half hour mark, following a scramble in the box, the ball was cleared off the line by County's Kurtis Rees, as the Silkmen once again cursed their luck.
Haverfordwest carved out their first real chance just after, as a good Danny Williams delivery was almost touched home by Marcus Griffiths, but he was unable to connect with the cross.
Flint keeper Aaron Jones was called into action to save a Griffiths shot a few minutes later, something he did with ease.
Joe Palmer tried his luck from range early in the second half, but once again it failed to find the target, drifting wide.
In the final half hour, the visitors began to press forward with more menace, especially after the introduction of Jack Wilson to proceedings, and they created two good chances in as many minutes. First, a Kurtis Rees header flashed across the Flint goal, and Griffiths was again unable to connect. Then, Wilson drove in a low cross and Williams flicked it goalwards, but Jones reacted well to save.
Rob Hughes brought the best out of Turner in the Bluebirds goal on 63 minutes, when he unleashed a drive that was palmed away. He had an even better opportunity a bit later, but missed his chance at the back post following an excellent delivery from Conor Harwood. Almost immediately, Haverfordwest went down the other end and opened up the scoring. Williams supplied Ben Fawcett, who put it a low cross and Wilson was on hand to tap home from close range.
Hughes tried to get Flint back on level terms with a long range free kick, but Turner tipped it over to safety. A penalty to the visitors in the 82nd minute allowed them to get the deciding second goal. Ben Lockley stuck his leg out and caught Wilson, and Danny Williams tucked away the spot kick.
Wilson was causing all sorts of danger to the Flint defence at this stage, and a few minutes later he broke through into the box again, and had he had squared the ball to the well placed Fawcett it would surely have been 3-0 as he was faced with an empty net in front of him. Aaron Jones pulled off a good save in the 88th minute to deny Ricky Watts, following a nice move from the Bluebirds, who were finishing the game strongly.
This was a game in which we were targeting the 3 points, so it will be very disappointing to come away with nothing, especially as we now face two tough away games to South Wales, with the rearranged home match against Bala sandwiched in between.