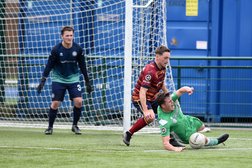 A trip to the Welsh capital ended in more misery for Flint, as they fell to their fifth successive defeat.

Once again, the Silkmen enjoyed plenty of possession, but were unable to convert it into goals, and then in the second period, they suddenly found themselves hit by a quickfire two goal salvo for the second week in a row. Although they managed to pull a goal back through Callum Bratley with just over 10 minutes remaining, they were unable to score a second, as Cardiff held on to record their first home win of the season. In doing so, the Met moved out of the relegation placings, and Flint replaced them.
The visitors started brightly, and Rob Hughes tested Met keeper Alex Lang on 7 minutes, as he saw him off his line, but Lang recovered to save comfortably. Hughes was closer to opening the scoring a minute later, mcwith a shot from the right, but his effort was just wide of the mark.
Almost out of the blue, Cardiff sprung forward on 19 minutes, and Kyle McCarthy hit a shot from the edge of the box that Aaron Jones had to push onto the post in making the save. Flint then pushed forward again, and after some efforts were blocked, Sam Hart had an opportunity, but hit his shot over the bar. Just before the half hour mark, the Silkmen thought they had good claims for a penalty as Alex Jones looked to have been brought down in the box, but the referee was uninterested.
Harry Warwick breached the visitors defence on 32 minutes, and was one on one with Jones, but the Flint keeper did exceptionally well to save, and keep the scoreline goalless. A challenge by McCarthy on Craig, just before half time, resulted in the Cardiff player being booked, and the Flint man unable to continue.
After the break, Met stepped up a gear. On 48 minutes, a clearing header out of the Flint defence landed at the feet of Dylan Rees who was a long way out. Without hesitating, he instantly drove the ball goalwards, and it snaked through several players and squeezed in between Jones and the post to nestle in the net and put the home side 1-0 up.
Soon after it was 2-0, when a smart finish by Ollie Hulbert put clear water between the two sides. It now looked as the game was about to run away from Flint, as Warwick was presented with another one on one chance, but he rather snatched at it, and in trying to chip Jones from distance put it over the bar.
Flint rallied, and had the ball in the net just after the hour mark, but it was ruled out for offside. However, following a corner on 72 minutes, they did manage to reduce the arrears, as Bratley headed in the delivery.
McCarthy attempted an acrobatic volley on 78 minutes, but couldn't keep it down.
In a frantic finish, Flint had another penalty claim turned down, whilst Jones had to be on his toes to deny Hulbert's close range effort. In the end Met held on to break their duck at home, and record a win over Flint in the first ever meeting between the two sides.

With thanks to Clwb Pel Droed for their match reporting