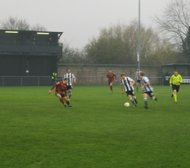 The old adage that things always tend to go against you when you're down the bottom, was certainly proved true in this crunch encounter

The opening exchanges between the two sides were fairly even until the game was tilted in the visitors' favour when Alex Jones was shown a straight red card in the 24th minute. He had gained possession of the ball and was trying to make inroads towards the Met defence when the ball ran away from him. In attempting to regain control he stretched out his leg to try and win it before the incoming Met defender Emlyn Lewis. Jones undoubtedly made contact with the ball, but his follow through caught Lewis and the Cardiff man crumpled in a heap on the turf. The way the laws are applied these days, such a challenge always runs the risk of being a sending off offence, if the official decides it was reckless. However, the referee certainly didn't help himself, as, in the immediate aftermath he initially produced a yellow card out of his pocket. To all intents and purposes, it appeared that a booking was judged to be the appropriate punishment. But then a delay ensued, as Lewis continued to writhe on the floor, and a change of heart took place, with a red card suddenly being produced and shown to Jones, who was incensed by the decision.
Both sides continued to cancel each other out for the remainder of the half, with Cardiff unable to make their extra man count as the Flint defence, well marshalled by Sam Hart, stood firm and protected Danby's goal. Callum Bratley and Mark Cadwallader, meanwhile, were proving excellent in closing down the Met players and acting as the first line of defence for their side. Bratley, in particular was covering lots of ground and his typical determination won the ball on the half hour mark to set up a Flint attack. He fed Conor Harwood, who got to the bye line and put over an inviting low cross that Cadwallader just failed to connect with from around 6 yards out.
After the break, Met noticeably upped their tempo, as all too often in the first half, their attack had been one paced and laboured. They also sought to get the ball wide on occasions and stretch the Flint backline. As the game wore on, it looked increasingly likely that their pressing would pay dividends, especially as the Flint defensive shape at times looked all at sea, with the midfielders dropping back on top of the back line, rather than trying to maintain two banks of four. So effectively, they were inviting the opposition onto them.
Even so, when the goal did come, it was mired in controversy with the officials once again doing themselves no favours in their handling of the situation. Following a scramble in the box, Oliver Hulbert fired home, only for the linesman's flag to instantly go up, with an apparent offside being signalled. Then the flag went down, and the assistant appeared to be heading back towards the halfway line, which provoked a huge outcry from the Flint players. He then stopped in his tracks, and once again raised his flag. The referee ran over to consult him, and both officials were surrounded by players from both sides as they held a lengthy discussion. Finally, the man in the middle indicated the goal would indeed stand, to the disgust of the Flint players and management, with Niall McGuinness being dismissed in the aftermath. A Cardiff player was standing directly in front of Danby, obscuring his view when Hulbert his his shot. Although he didn't touch the ball, he was no doubt in an active offside position, but the referee chose to overrule his assistant and give the goal.
Following this latest setback, Flint had to throw caution to the wind, and understandably left gaps at the back, as they sought to rescue a point. Danby managed to pull off a good save as Dylan Rees let fly from distance, shortly before Bratley once again won possession, and hit a shot from the edge of the box, which Met keeper Alex Lang managed to block.
On 84 minutes, Hulbert crossed to Harry Warwick just beyond the far post. His effort struck the woodwork, and then Danby flung himself across his goal to deny a follow up attempt, before Ben Nash made a great last ditch tackle to deny Eliot Evans who looked as though he had an open goal to choose from.
Lang denied Kai Edwards whose headed effort just lacked the necessary power as the Silkmen continued to pressure the Met goal, but like so many previous occasions this season, they were unable to force the ball over the line and rescue a point.
Line Ups :
Flint Town United - J. Danby, T. Kemp (B. Nash 70), N. Craig, K. Edwards, S. Hart, B. Maher, A. Jones, R. Foulkes (c), C. Bratley, M. Cadwallader (R. Hughes 76), C. Harwood (B. Steer 80). Unused Subs - A. Jones (GK), A. Brown, B. Lockley
Cardiff Met - A. Lang, D. Rees, K. McCarthy, B. Woolridge (c), E. Lewis, E. Evans, O. Hulbert, J. Davies (H. Owen 63), R. Morgan, L. Warman (H. Warwick 80), L. Black. UInused Subs - W. Fuller (GK), M. Chubb, T. Davies, B. Roberts, M. Jones

Flint MOM - Callum Bratley (once again demonstrated tremendous work rate, especially when his side went down to 10 men)