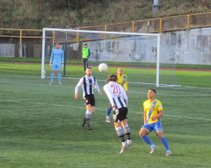 2nd Half Fight Back falls short as Barry score Six

Although Flint rallied well from 4-1 down to reduce the arrears to 4-3, two late goals from Barry saw the hosts run out comfortable winners

The damage was really done in the first half, when Flint never really got to grips with the game, and a porous back line paid the price conceding three goals in the opening 45 minutes. The Silkmen's defensive back line had a look of a zig zag about it at times, and Barry's players were finding it remarkably easy to run through the rearguard, either straight through the middle or out wide. After having a let off in the opening few minutes, when a Chris Hugh delivery from the left into the box was just about dealt with by John Danby, a through ball on 6 minutes beat the offside trap, and found it's target Jordan Cotterill, who kept his composure to slide it pass the Flint keeper and give the home side an early lead.
Jordan's cousin David, the ex-Welsh international then tried his luck from range on 11 minutes, but his shot was just wide of the post.
Barry carved Flint wide open with a crisp exchange of passes on 32 minutes, as Luke Cummings played in Jordan Cotterill down the right hand side, and his perfect delivery across the 6 yard box was despatched by Sam Bowen.
Flint managed to fashion their first decent chance on 35 minutes, when Callum Bratley did some great work to win the ball in the right corner, before laying it off to the supporting Tom Kemp, whose cross to the far post was met by Mark Cadwallader. His header was blocked by a combination of Curtis McDonald and goalkeeper Josh Gould, who turned it out for a corner.
Bratley's determination was instrumental in the move that led to Flint pulling a goal back on 42 minutes. He won the ball on the left side and combined with Conor Harwood, before moving infield and receiving the ball back and striking a shot against the post, which bounced out into the path of Cadwallader who tucked it home.
However, no sooner had Flint given themselves hope of going into the break just one goal down, than a simple ball over the top to find Kyle McLaggon caught them napping defensively two minutes later. The Barry forward controlled it with his left foot, switched it to his right and darted past Kemp before curling a shot into the net.
McLaggon had another chance gifted to him at the start of the second half following a defensive error, but this time Danby got down smartly to save.
Barry increased their lead on 54 minutes, when a David Cotterill free kick was met by Luke Cooper from 12 yards out, and his header beat Danby to make it 4-1.
Just as it seemed all was lost, Flint suddenly went on the front foot and started to get more bodies forward, utilising the width with much more purpose. Key to this was the introduction of Andy Brown to the action, who immediately made his presence felt up front. He won a corner on 64 minutes, and from that, a Ben Maher delivery found the head of Cadwallader who scored his second of the afternoon.
Flint now had a bit of pace and momentum to their game, and on 72 minutes a Sam Hart cross clipped off the top of the bar, with Gould stranded. Then, a minute later, Kemp whipped in a ball from the right, and Harwood was well placed to take advantage and pull another goal back. All of a sudden, Barry were rocking defensively, and an unlikely comeback looked as though it might be on the cards.
Had Cadwallader been able to make contact with a Brown flick on, on 84 minutes, that may well have been the case. But the ball agonisingly eluded him and ran through to Gould.
With Flint continuing to pour forward, they were of course vulnerable to the counter attack, and a swift break by Barry on 86 minutes made the game safe. Jordan Cotterill was again the provider as he squared the ball along the corridor of uncertainty between keeper and defender, and Nat Jarvis was on hand to tap home. The Silkmen's misery was compounded in stoppage time, when a long clearance out of defence was latched onto by Cotterill, who beat Danby to it in a foot race, as the Flint keeper came haring out of his area, and his effort from about 40 yards bounced into an unguarded net.