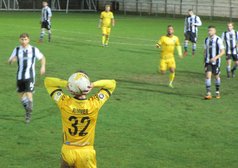 Neil Gibson celebrated his second match in charge with a morale boosting win that lifted his side off the foot of the table. Two late goals, courtesy of substitute Rob Hughes, put the seal on the win, adding to Mark Cadwallader's well taken first half goal.
The game was a bit slow to ignite, with both sides attempting to come to terms with a heavy pitch, and given the importance of the game, owing to their current league positions, neither wanted to fully commit to attack and expose themselves at the back. It was the visitors who carved out the first real chance on 16 minutes, as an inswinging corner was first cleared off the line, but only to Mathew Jones who was positioned just outside the box. His rising shot just cleared the Flint bar.
Gradually Flint asserted themselves on the game, It was noticeable that they had set out to pace themselves across the full ninety minutes, unlike on Tuesday evening, when they had gone hell for leather for the opening 45 minutes only to visibly tire in the second half. By passing the ball around between midfield and defence, they were patiently building up play, and then looking to release their forward players. Just before the half hour mark, a Ben Nash header from a corner forced Connor Roberts into his first meaningful save, as he had to tip the effort over his bar.
Flint had also had a goal correctly ruled out for a foul in the build up, before Cadwallader struck on 43 minutes. Nash had put in a robust, but fair, challenge to win the ball back for his side, before feeding Alex Jones. The Flint skipper looked up and played a defence splitting ball through to Cadwallader to run on to. Having gone in between the two central defenders, Caddy took the ball into the box, and with the outside of his boot, guided it past Roberts.
Aber came out strongly at the start of the second half, and forced a series of corners, but in contrast to Tuesday night, the Flint defence stood up to the test very well and repelled all attempts on their goal. Owain Jones had looked the most likely player for the Seasiders in the first half with his direct runs, and on 48 minutes he was left unattended on the far past and was found with a delivery which put him in a great position to score. As he controlled the ball, he cut inside but his effort was blocked for a corner. Then, Mathew Jones tried his luck from fully 30 yards out on the right, but his shot just failed to find the target.
On 53 minutes, Jones broke down the right for Flint. Tom Kemp went on the overlap, creating a perfect dummy run and drawing the attention of a defender, allowing Jones to run infield and play a square ball into the path of the oncoming Wes Baynes, who took it in his stride and lashed a shot just wide of the Aber goal.
Rob Hughes was introduced inti the action on 70 minutes, and was to have a big impact on the remainder of the game. His first contribution, just after coming on was to hit a 20 yarder that went just wide of the post. Then, on 85 minutes, as he attempted to get onto a loose ball, a rash challenge by Aber substitute Richard Ricketts, just inside the box sent him sprawling to earn Flint their first penalty of the season. Hughes got up to take the spot kick and drilled it straight down the middle.
Some great interplay between Flint's forwards on 90 minutes produced the third goal for the Silkmen. Harwood found Hughes, who laid it back to Bratley, before he returned the ball, supplying Hughes as he moved into a more central position. His determination allowed him to weave his way past the Aber defenders, turning Jon Foligno inside out, before tucking a shot underneath Roberts and rounding off an impressive win for his side.

Flint MOM - Ben Nash (although there were central contenders including Alex Jones and Ben Maher, Nash was instrumental in ensuring his side kept a clean sheet giving them the platform for their success)