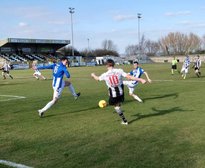 In a game of limited chances, Penybont's solitary goal was enough to secure the points as Flint's new look team struggled to gel.

The visitors, having benefited from their midweek competitive game, looked the more accomplished side during the first 25 minutes or so, as Flint were unable to find any sort of rhythm, and it was during this period that they struck the all important goal. Nathan Wood swept home on 12 minutes when he met Mael Davies' cut back on the half volley.
Bont had already served warning when Sam Snaith was allowed a free header in the box, but it lacked sufficient power and Jon Rushton, on his Flint debut held comfortably.
Shortly after the goal, Davis hit a swerving effort from range for Bont, but it was just off target.
In their first incisive attack, Flint thought they had a strong shout for a penalty, when Mark Cadwallader ran into the box, and appeared to be clipped from behind, as he bore down on keeper Ashley Morris, but the referee remained unmoved by the home side's pleas.
Penybont's Kostya Georgievsky had a one on one with Rushton on 20 minutes, when he received the ball from what initially looked like an offside position, but the linesman kept his flag down. The Flint stopper distinguished himself with a good blocking save to avert the danger.
Rob Hughes looked Flint's most likely outlet as an attacking force, and he weaved into the box on 25 minutes, but Morris cleared his cross, as he looked to deliver the ball into the danger area. A few minutes later, Jordan Buckley almost got on the end of a through ball, but Morris was alert to the danger once more, and raced out of his area to clear the danger just ahead of the Flint striker. Hughes then tried his luck with a free kick from 22 yards out, but his effort could only find the roof of the net.
In the second half, Bont successfully closed the game down, and chances for both sides were few and far between. The final ball was all too often lacking in quality from the Silkmen, when they did manage to penetrate the final third, and Morris remained largely untroubled. Hughes embarked on one of his trademark mazy runs just after the hour mark, and worked his way into the box, before slipping the ball towards Cadwallader, but Morris just beat him to it, and once again snuffed out any potential danger.
And that's about as good as it got for Flint in the second half, as Bont's game management frustrated the Silkmen. So it was a disappointing return to action after the long lay off, but perhaps not entirely surprising given the limited training and the presence of so many new faces.