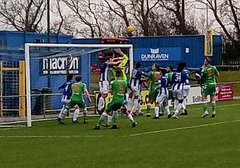 After three goalless home games since the restart, Flint came out firing in South Wales and deservedly took all three points

They were the more accomplished side from the off, and the front three of Josh Amis, Callum Bratley and Conor Harwood were soon proving a real handful for the Penybont defence. The midfield also looked to have more solidity and bite than in recent weeks, with the returning Alex Jones making a major difference.
A slick move down the left carved open the Bont defence after seven minutes. Amis started it, laying the ball off to Bratley, who instantly played an incisive ball into Sam Hart, who galloped towards the bye-line before delivering an inviting cross onto the head of Amis, who much to his own disgust, was unable to direct it on target.
Harwood's pace was also causing problems for the home defence, and he almost got in between Ismail Yakubu and keeper Ashley Morris, but Morris bravely came out and won the ball, with both players coming together in a nasty looking collision.
Flint's pressure was soon telling in terms of corners, and Morris, not the tallest of custodians, was clearly having trouble dealing with inswingers.
So much so, that a Sam Hart delivery on 36 minutes, sailed right over him and eluded all of the other players, before nestling in the far corner to give the Silkmen a deserved lead from the unlikeliest of sources.
Flint maintained their tempo, and were rewarded with another goal on 42 minutes. This time Tom Kemp was in an advance position down the right flank, and he fired in a ball across the face of the eighteen yard box, which Bratley met with aplomb to sweep it into the corner of the net.
Rhys Griffiths made a double substitution for his side at half time, as they sought to force their way back into the game. One of the new arrivals was Lewis Clutton, and he was to prove the most potent threat for Penybont.
On 65 minutes, Kai Edwards was deceived by the bounce of the ball, and Clutton profited and ran through towards the bye-line. He tried to squeeze his shot past Jon Rushton from the narrowest of angles, but it struck the post and bounced into the arms of the Flint keeper. Flint were now content to sit back and soak up the pressure and look to hit on the break.
Amis, though, was a constant threat for the visitors, and the big centre forward had the ball in the net on the hour mark, but he was adjudged to have fouled a defender in the build up, and so the goal was ruled out. He then let fly on 70 minutes from just inside the box, but Morris managed to get fingertips on the ball to divert it around the post.
Another dangerous mover on the counter attack saw Bratley released in space, with just Morris to beat. But this time, the striker's finish couldn't match the quality of his earlier effort, and he snatched at his shot, sending it wide of the target.
Rushton was called upon to deny Nathan Wood with a strong hand which he used to divert the striker's effort up and over his crossbar. Then,
deep into stoppage time, Penybont did manage to pull a goal back, to deny Flint the clean sheet their performance probably merited, and it was that man Clutton who tucked it away. With his back to goal, just outside of the box he received the ball, turned and sprinted through on goal to slot it past Rushton.
However, the points were safe and it was merely a late consolation for the hosts. After last week's misfiring performance, this was a much needed boost, and has set the standard for the players to emulate in the games ahead, starting next week against The New Saints !