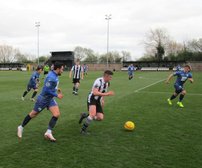 Four goals in the opening 16 minutes knocked the stuffing out of Flint, and effectively ended the game as a contest to all intents and purposes

After the excellent result last weekend, this was a big comedown for Flint, who failed to get to grips with the visitors early on, and heavily paid the price. Runners from midfield were not picked up, especially Adrian Cieslewicz, who repeatedly cut through the home defence like a knife through butter.
Flint created the first chance of the game on 3 minutes, when a ball was played for Alex Jones to run onto, and his instant shot went over the bar. But then TNS took control of the game, and showed no mercy in front of goal when presented with the opportunities, Cieslewicz carried the ball into the area, all too easily evading challenges, made it to the bye line and then pulled it back across the face of goal, presenting Ben Clark with the easiest of opportunities to tap home.
Before Flint had time to clear their heads, the lead was doubled a minute later. A corner was hit to the far post, and Ryan Astles turned it in. Things went from bad to worse on 12 minutes, as Cieslewicz was again allowed to burst through the Flint ranks, before finding Louis Robles who hooked the ball home. Robles was then given too much space from a corner on 16 minutes, and Chris Marriott's ball picked him out and he converted to make it 4-0.
Following that four goal salvo, Flint regained a bit of composure, with both Alex Jones and Callum Bratley showing up well as they tried to drag their side back into the game. Indeed, Jones tested Paul Harrison with a long range effort on 24 minutes, which warmed the hitherto cold gloves of the TNS keeper.
Just as it looked as though the Silkmen would get to half time without any further damage, Ross Weaver played a wayward pass which gifted possession to Greg Draper who in turn swiftly played in Cieslewicz, and the TNS dangerman needed no second invitation as he controlled the ball and slotted it home to make it 5-0. A Sam Hart free kick from 25 yards out following the restart almost pulled a goal back, but it just cleared the target.
Flint must have breathed a collective sigh of relief when Cieslewicz was substituted at half time, although his replacement Ryan Brobbel was also going to make his presence felt.
An opening flurry from the home side at the start of the second half led to Josh Amis firing just wide. But then up popped Brobbel to hit a low curling shot into the corner of the net from just outside the area. Thankfully, that was as bad as it got for the Silkmen, who were more competitive in the second period, and restricted TNS to few chances, although Robles went close when his cross cum chip shot had Rushton struggling as he back peddled along his line, and the ball clipped off the top of the bar.
Flint can take some comfort from the fact that the second half was much more even, but even so, the current chasm between the top two teams and the rest of the league was once again confirmed following this heavy defeat, which made the aggregate score from our two league meetings this season 16-0 to TNS.
Line Ups :
Flint Town United - J. Rushton, T. Kemp (D. Roberts 87), E. Clarke, S. Hart, B. Nash, E. Gumbs, A. Jones (c) (J. Hampson 87), R. Weaver (M. Cadwallader 71), J. Amis (M. Blackwell-Jones 87), T. Weir (J. Buckley 67), C. Bratley. Unused Subs - R. Woods (GK), R. Hughes
The New Saints - P. Harrison, S. Spender (J. Canavan 75), C. Marriott , B. Hudson, R. Astles, J. Routledge (L. Smith 67), L. Robles, B. Clark, G. Draper (A. Roscrow 57), D. Redmond (T. Holland 57), A. Cieslewicz (R. Brobbel 46). Unused Subs - R. Williams (GK), K. Davies,