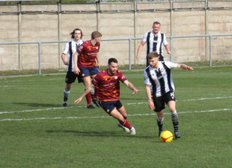 Flint start Phase 2 with a win

The Silkmen took the opportunity that lay in front of them to leapfrog their opponents from the capital yesterday, with a hard-fought 2-0 victory.

In tandem with the league split, was the sunshine and a win for Gibbo’s men, making it something of a new dawn, as we embark on the final months of what has been a stop-start season in the JD Cymru Premier League.
The match followed a similar pattern throughout with chances coming few and far between. However, it was Flint who created the first real opportunity of the match in the 12th minute; when a looped pass in behind from Conor Harwood was latched onto by Josh Amis, who held it up brilliantly before showing great awareness and composure to tee-up Callum Bratley whose finish cut agonisingly wide of the post. Whilst chances were limited, action was aplenty i