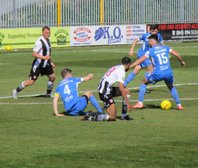 Remarkably it's taken until their 27th game of the season for the Silkmen to record their first draw.

On a glorious day in south west Wales, Flint were unable to return to winning ways but earned a point against a gritty Haverfordwest side, who were eager not to suffer further embarrassment after their previous two heavy losses.
The first half followed a very similar narrative throughout with neither side comfortably acclimatising to the hard surface and the sunny weather and strong breeze. It all combined to make ball retention somewhat difficult, with lots of bouncing balls and few passes sticking for either team.
Flint started the better of the two teams, with long balls in behind for Jordan Buckley and Josh Amis proving effective. However, it was Haverfordwest who created the most notable chances in the first half, usually by way of errors from the away side. In the 11th minute the Bluebirds hit the crossbar, when a speculative cross sailed over Jon Rushton before hitting the top of the bar. Then, a few minutes later Rushton was called into making a fine stop at his near post after the hosts latched onto a loose pass at the back. From there, the half continued to be played out in a scrappy manner until after a great flick and turn in the box from Ben Fawcett, before he blazed over on the half volley from 6 yards out.
Flint momentarily upped the tempo at the start of the second half with a couple of early corners troubling the keeper as he struggled with the sun. This was followed up by Alex Jones capitalising on sloppy play at the back by Haverfordwest before switching play to Buckley who measured up his options before sliding through a ball to Amis whose flicked effort with the outside of his boot was well saved by the goalkeeper. From then on Flint struggled to create many opportunities except a hopeful overhead kick from Jordan Buckley that just looped over the bar on 75 minutes. But the best chance came in the 80th minute, when a drilled shot by Alex Jones was fantastically stopped by keeper Wojciech Gajda after it dropped down to him from a corner. However, it was the introduction of Jake Hampson into the game in the 83rd minute that seemed to give the Flint the extra spark they needed to go and win the game.
Jones had created a chance, stealing the ball brilliantly, and then weaving his way into the box, only to deliver a tired finish, but then Hampson showed his quality of delivery by putting two brilliant balls into the box, that were agonisingly close to being finished off by both Tom Weir and Amis. But in the end, the Silkmen didn't quite have the cutting edge required, and so had to settle for their first draw of the season.

Flint MOM - Sam Hart (The back three returned to their mean defensive spirit, and Hart just narrowly edged the award ahead of his colleagues Ben Nash and Evan Gumbs)