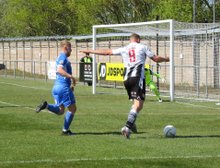 Flint claimed their first win in four games, as they comfortably saw off the challenge of Haverfordwest.

The Silkmen started brightly, as a corner was met by an unmarked Alex Jones but he failed to connect properly with his header.
15 minutes in, and the next big chance also fell Flint’s way. Sam Hart found Callum Bratley with a neat ball down the left and he dribbled into the area and tested Bluebirds keeper Wojceich Gadja at the near post.
The visitors, though, remained resolute, and created their first dangerous moment after 35 minutes in. Some sloppy play in the defensive third, allowed Jack Wilson to cut in from the left and fire a shot on goal from the edge of the area, which struck the outside of the post.
That let off proved crucial for the home side, as moments later, Flint took the lead. The Silkmen played out from the back and made ground up the pitch, before a finely weighted ball from Ben Nash was met by Josh Amis to head into an empty net after the keeper had been beaten by the big forward in the air.
In added time at the end of the first half, Flint had the chance to make it 2-0. A Sam Hart delivery from a corner was turned goalwards by Ben Nash and kept out twice before the ball fell to Evan Gumbs, but the central defender could only fire over from close range.
Flint began the second half where they left off, and this time successfully managed to double their lead just three minutes in. A terrific piece of skill from Hampson down the right, turned the visitors fullback inside out, before he was chopped down as he looked to accelerate away, earning his side a free kick. The youngster himself then stepped up to deliver an inch perfect cross from the set piece, which was guided superbly into the far corner of the net by Alex Jones with a well placed header.
With 20 minutes to go, the boys in black and white looked to press home their advantage and put the game to bed. A lively Hampson went on a mazy run from the half way line, successfully dodging challenges and when he broke into the box on the right hand side and unleashed a strike. Unfortunately, the ball was inches away from finding the far corner, and also just eluded the incoming Amis.
The visitors did try to create a late consolation goal and won a few free kicks and corners, but the Flint defence were generally unruffled. Indeed, it was that man Hampson who almost had the final say, when he burst through the lines once more, skipped inside and let fly with a left footed shot that just crept the wrong side of the post from his point of view.
This win for the Silkmen takes them back level on points with Aberystwyth on 28. Next up is an away trip to Cefn Druids on Tuesday night, as Flint look to keep up the pressure on the Seasiders.

Flint MOM - Jake Hampson (the youngster continues to impress having broken into the team and produced another composed display, with an assist and some incisive runs)