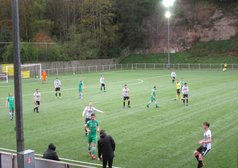 Despite missing a host of chances, Flint still managed to run in six goals, to make it an eleven goal haul against Cefn for their Phase 2 meetings.

Flint started the brightest putting pressure on the Druids’ back line with a succession of corners. Six minutes in, Eddie Clarke found Josh Amis with a cross but the big number 9 couldn’t convert. From the resulting goal kick, the home side looked to play their way out but reached no further than the edge of their own box, before Amis won the ball from their defender and gave it to Conor Harwood. The forward could have shot himself, but showed composure to slip it back to Amis who stroked the ball into the net.
The fast start set the tone for the rest of the half and chances were created effortlessly for the visitors, but, alarmingly, none were put away. First Jake Hampson had an effort after 20 minutes which flashed wide of the far post. Next up was Amis. The goal scorer had efforts with a header which just sailed wide, a 1v1 situation which the keeper smothered and then some neat footwork to take the ball around the keeper which he then ran out of room to force an effort on target. Harwood also had a couple of decent chances, but was unable to convert. An inswinging corner also nearly paid dividends, as a Druids defender was forced to head onto his own bar under pressure, with the ball falling into the path of Evan Gumbs, who saw his drive cleared off the line.
As the first half ended, the away side went in with just a slender 1-0 lead, but the game should really have been done and dusted by that point.
The second half got off to a similar manner and it looked like the same pattern of play was happening all over again, with chances being created and missed. This time Alex Jones was the guilty party, firing straight at Druids keeper Mike Jones, following good work from Harwood down the right hand side.
The frustrations were finally eased on 52 minute, when Amis put a chance away. The striker was slipped in by Bratley, who had brilliantly dribbled his way into a dangerous position in the box, and his low composed finish across the keeper made it 2-0 as the pressure paid off. In the build up to this goal, Druids midfielder Alex Darlington tried to scythe Bratley down in the middle of the pitch, as he began his run. The referee played a good advantage, and allowed Bratley to carry on, resulting in the goal. But in the immediate aftermath, Darlington and Richie Foulkes squared up to each other, and the Druids man received two yellow cards in quick succession, first for his original lunge, and then for his altercation with Foulkes, which led to him being dismissed. For his part, the Flint skipper was also booked.
Not long after the second, Flint had their third. Amis won a free kick centrally about 25 yards out after being brought down. Up stepped Ben Maher to fire a wonderful strike over the wall and beyond a helpless Jones in the Druids goal.
On 67 minutes, Amis sealed his hat-trick. Clarke was put in down the left hand side and his sheer pace helped him get away from his man to the byline. When he pulled the ball back low along the ground to the penalty spot, a confident Amis fired high into the top corner with a first time effort.
On the 70th minute mark, Druids were reduced to nine men when Smith was sent off for a second yellow card after hacking down Mark Cadwallader. The Silkmen showed no sign of letting up, and Cadwallader fired hard and low across the goal leading to Druids defender Jacob Wise turning the ball into his own net.
Unfortunately for the home side it didn’t stop there. In added time, Sam Hart was up from the back to head home a Ben Maher centre to seal a memorable 6-0 away win, and record Flint's biggest win in the Cymru Premier since their return.
This now sets up an intriguing contest against Aberystwyth on Saturday, when a win will secure us a finishing position above the bottom two.

Flint MOM - Josh Amis (hat-trick hero who proved a real handful for the Druids defence, although he could, and probably should, have added more goals to his tally)