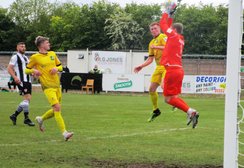 Honours Even at the Essity

Flint welcomed Aberystwyth for their final home game of the season, knowing a win would confirm they wouldn't finish in the bottom two.

It was the visitors who started the livelier, creating two good chances, the first, via a flick on from a corner, being smashed over at the back post by Louis Bradford, and the second saw Jon Rushton called into action to smartly stop a David Evans header.
It wasn’t long before Flint created their first chance though. Eddie Clarke showed skill and pace down the left flank before cutting inside and unleashing a shot just wide of the post on his weaker foot.
The left full back was again the creator for Flint's next chance. A superb ball delivered into the box from the left, evaded both Conor Harwood and Alex Jones whilst Josh Amis who did manage to connect, wasn't able to turn it goalwards.
On the opposite side to Clarke was fellow wing back Callum Bratley, who was instrumental in creating the first effort on target for the home side. After a beat piece of skill to evade his marker, he pulled the ball back to Ross Weaver on the edge of the box, and he unleashed a shot which forced Aber keeper Connor Roberts to make a save down low.
But the biggest chance of the half fell to Harry Franklin for the visitors. He burst into the box holding off challenges from Flint defenders, although the attentions of Ben Nash did just enough to force the attacker to blaze over the bar from close range, although he probably should have done better with his effort.
Josh Amis, who, hitherto had a quiet first half, had a chance towards the end, when Nash found him with a fantastic ball but the striker lacked enough power on his finish to trouble the goalkeeper. Right on the stroke of half time, Amis was once more in the thick of the action, but this time for all the wrong reasons, as he was shown a straight red card for an overzealous challenge on Jamie Veale. Whilst the initial tackle was fair, it was was the follow through that was the problem and clearly hurt the Aberystwyth player. The home side, though, were unhappy because of what had looked a similar tackle earlier in the half from Aber's Harry Franklin, only warranted a caution.
Despite being reduced to 10 men, Flint more than held their own in the second half and for the majority of the time limited the away side to mainly half chances.
The most clear cut chance came with just 10 minutes to go. Following a cleared corner, the ball was stood up to the back post and when it was knocked down and smashed toward goal from close range, Rushton was equal to it and kept the scores level.
Although Aber made some late attacking substitutions to push for a goal, the visitors lacked the necessary creativity and Flint defended superbly to see out the game and take a well deserved point. Indeed, if they had been able to show the type of defensive solidity that has been on display of late, earlier in the season, in games they lost by the odd goal, then they would have been completely clear of the bottom two positions by now. As it is, we go into the final game away to Cardiff Met still needing to equal or better Aberystwyth's result to guarantee ourselves at least a tenth placed finish. Fortunately, the threat of relegation has been removed for this season, otherwise next week would have been a very tense affair indeed !

Flint MOM - Jon Rushton (The busier of the two keepers, who, when called upon was superb to ensure his side kept a well earned clean sheet).
Report by Dan Broadbent