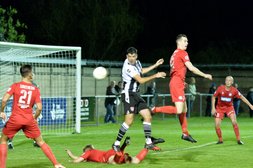 Former Welsh international Dave Edwards was on hand to flick the ball home in added on time to claim all three points for Bala, as the Flint defence paid for a lapse in concentration following a throw in that was incorrectly awarded to the visitors.
Up until the final quarter of the game, the Silkmen had doggedly been holding onto a slender first half lead, given to them by their talisman Michael Wilde, and had spurned at least two other good chances to get the vital second goal, which probably would have been enough to see them over the line, but instead back came Bala to steal the points, with a couple of inspired substitutions by manager Colin Caton proving the catalyst.
The visitors had laid siege to the Flint area in the opening quarter of an hour, but the home defence were resolute, with the central pairing of Kai Edwards and Danny Harrison, in particular, proving dominant, and despite the pressure applied, Bala were unable to forge any decent chances. Flint were set up to make the most of the counter attack, and on 17 minutes almost went ahead. They broke through Jack Kenny down the right, who then held the ball up, and played it back into the path of the supporting Jake Phillips. A first time cross by Phillips was met by dangerman Wilde, but his header finished just wide of the target. Shortly after, a cross from the left found Sam Hart who headed into Bala keeper Harri Lloyd's hands.
Flint were now gaining in confidence, and on the half hour mark, a fine sweeping move down the left paid dividends. Hart had initiated the play, and after a couple of nice one touch passes he received t