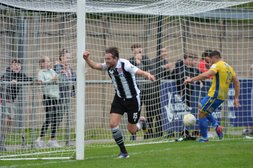 Flint come out on top in five goal thriller

Both sides served up a treat in front of another 400 plus crowd at the Essity , with the game see-sawing back and forth, finally being decided in the Silkmen's favour in the dying moments.
Barry were first out of the blocks, and Jordan Cotterill was smartly on the end of a through ball in only the second minute, coolly lifting his effort over Ryan Woods to put his side in front. Flint hit back strongly, and almost equalised straight away, but Mike Lewis was alert enough to deny Michael Wilde, in what would be the first of many fine saves he was to make during the course of the afternoon. Then, on 12 minutes, a Jake Phillips long throw was met by a Barry defender, who directed it towards his own goal, but fortunately for the away side, it struck the bar rather than the back of the net. This was to be a tactic that Flint would employ to good effect throughout the game, with numerous half chances being created, but a combination of good defending and less than clinical finishing meant that all too often the opportunities presented went begging.
Set pieces were another important part of the home side's armoury. And in the 25th minute a Sam Hart corner caused mayhem in the Barry area. The ball was bouncing around, and eventually landed at the feet of Alex Jones who lashed it goalward, and it thundered against the crossbar, before coming down onto the goal-line and being scrambled away.
A couple of minutes later, Wilde and Jack Kenny combined well, before the latter headed the ball down into the path of Mark Cadwallader, who found himself in space with only Lewis to beat. but the Barry keeper spread himself well and denied the Flint striker.
However, in the 29th minute, Cadwallader wasn't to be denied, as the same three Flint players linked up once again. Wilde flicked onto Kenny, who again found Cadwallader, who had rushed into the 6 yard box to get on the end of the ball and force it past Lewis from close range.
Flint now had their tails up, and were determined to press home their advantage. Lewis produced a really breathtaking save in the 38th minute, almost reminiscent of the famous Gordon Banks save from Pele, as he acrobatically stopped a Wilde header from another dangerous cross into the Barry box.
Then, on the stroke of half time, Flint took the lead. Kai Edwards produced an amazing 40 yard defence splitting pass along the ground to find Kenny, who beat his man, advanced in on goal and rifled the shot into the roof of the net. Even the Barry fans sportingly had to applaud it.
Unfortunately, the Silkmen's dominance deserted them with the onset of the second half, and their midfield were guilty of allowing their Barry counterparts too much time and space, which they took full advantage of, to equalise on 48 minutes. Cotterill made the most of the space afforded to him, and picked out Kayne McLaggon who controlled the ball,before shooting home from a narrow angle on the right side of the area.
It was now very much game on, and Flint had to try and shake themselves out of their lethargy. Another long throw provided them with a good opportunity, setting up a Ben Maher half volley which deflected just wide of the post. Then, on 57 minutes, Dan Roberts met a free kick at the far post, and his effort looked as though it was heading it, before it struck teammate Wilde near the line, and his touch put it wide of the target. A few minutes later, Jones was just wide with a header from a corner.
Back came Barry, and Cotterill was unlucky when his curling shot beat Woods but struck the Flint post, after McLaggon fed him on 65 minutes. Just a minute later, Rhys Abbruzzese played a ball right across the face of the Flint goal from the bye line, but no Barry player was able to get a telling touch.
Flint were still proving dangerous from crosses, and Wilde, unusually for him, headed a glorious chance off target, justt as the Flint fans were about to celebrate.
Barry dangerman Cotterill broke to good effect in the 80th minute, before hitting a shot that forced Woods into a fine fingertip save.
Flint were awarded a corner in the 87th minute, that some of the Barry players hotly disputed. This time Hart varied it, and played a shorter corner to Callum Bratley, who in turn squared it into the path of Maher who was positioned centrally about 20 yards out. He hit an absolute pearler into the top corner of the net to make it 3-2 to the Silkmen.
As Barry tried to hit back once more, Flint broke through the energetic Phillips , but once again Lewis was to the rescue for his side as he pulled off a terrific save.
This win puts us in good shape for a big week ahead, as we travel to 4th placed Caernarfon on Tuesday evening (7-45pm) before facing local rivals Connah's Quay Nomads in a huge Welsh Cup tie at the Essity next Friday evening (7-45pm).