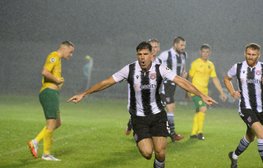 Late Winner moves Flint back up into second

For the second game in succession, a late goal in favour of the Silkmen delivered them all three points and a 3-2 win

It has to be said though, that Saturday's game was a lot more easy on the eye than this encounter, which at times was an attritional affair. However, sometimes you just have to dig in to win matches, and to their credit, Flint did exactly that.
The Silkmen had a great early chance on four minutes, when Mark Cadwallader burst through the lines. He rounded Cofi's keeper Tyler French, only to blast his shot into the side netting when he looked odds on to score.
Caernarfon's game plan was to try and use the pace and trickery of Rob Hughes as their main attacking outlet, and this worked perfectly in the eleventh minute as he scored an excellent solo goal. Having picked the ball up just inside the Flint half he ran at the heart of the Silkmen's defence, and despite the presence of three or four defenders on the edge of the box, he jinked and weaved his way through them, before shifting to his right and placing a shot past Ryan Woods to give his side a lead.
Having gone a goal up, the home side were content to sit back in numbers and soak up any Flint pressure, hoping to catch them on the break. For all their huffing and puffing, Flint were unable to create any more openings in what transpired to be a dour remaining first half, and the Cofis defence, marshalled well by veteran Steve Evans, coped well with any crosses into the box.
The home side looked to grow in confidence after the break, and became more adventurous themselves, with Darren Thomas getting into some good positions and letting fly with a couple of efforts from just outside the box, which if nothing else, served to rouse the home crowd. Meanwhile, Flint were still struggling to make inroads, and seemed to be lacking some penetration in the final third. In what served as another wake up call for the Silkmen, Hughes was narrowly wide with a shot from the edge of the box, shortly before Callum Bratley was introduced into the action, and his presence was instrumental in Flint becoming a more potent attacking force.
A series of corners proved key to finally breaking the deadlock. Two in succession had already been hurriedly cleared by the home defence, which was now starting to creak under the pressure, and it was third time lucky for Flint when a Ben Maher delivery was met by Michael Wilde to head home and bring his side back on level terms, in the 72nd minute.
Just a few minutes later, Flint took the lead, thanks to a somewhat fortunate deflection. Bratley tried his luck with a shot, which never really looked too convincing, but it struck a prone Caernarfon defender on the 6 yard line and bounced nicely into the path of Conor Harwood, who despite not making the cleanest of connections, did enough to force the ball under the body of French and it crept over the line.
But the drama was far from over, and Flint paid the price for not getting close enough to their men in midfield as Caernarfon fought back. Hughes this time was the provider as he was afforded space to deliver a nice cross that was well met by substitute Mike Hayes who directed his header into the corner of the net on 82 minutes to restore parity to the scoreline once more.
Flint are nothing if not resilient this season, and weren't content to settle for the one point on offer. In the last minute of normal time, Maher delivered a lofted ball onto the head of Wilde, who got his effort on target, but it looked for all the world to be a routine save for French. Instead, the ball squirmed through his grasp and dropped behind the goal line, to the delight of the travelling Flint support.
With the game deep into stoppage time, Caernarfon were awarded a free kick centrally about 22 yards out. Sion Bradley struck a great effort that was heading under the crossbar, until Woods leapt across his goal and got a big hand on it to push it over the bar and ensure that the Silkmen left the Oval with all three hard earned points.

Flint MOM - Michael Wilde (had a real ding dong battle with Steve Evans, kept at it, and was rewarded with two goals)