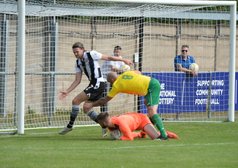 Flint comfortably through to next round

A convincing 5-0 scoreline meant that Flint secured safe passage into Round 3 of this season's Welsh Cup, with the match effectively over at half time.

By then, the Silkmen were already three goals to the good with a brace from Michael Wilde and a single from Jack Kenny giving them a comfortable platform.
Once they had got their noses in front, the Silkmen never looked like giving their lower tier opponents a chance of getting back into the game, and it was more a question of how many the hosts were going to score. Having sewn the game up by half time, though, Flint were much more sluggish in the second period, and much to the visible frustration of manager Neil Gibson in the dugout, found it difficult to make further inroads, until late on, when goals from the returning Mark Cadwallader, and Kenny once more, added to the scoreline.
Kenny had already gone close for Flint on 15 minutes, shooting wide as the Penrhyn keeper Morgan Jones rushed out to close him down after he had breached the visitors' defensive line. But then, just a couple of minutes later, a slick move down the left, carved out the opening for Wilde to strike. Sam Hart broke down the flank to the bye-line, and he knocked it into Tom Weir, who produced a nice flick to send the ball towards the back post, where Wilde was waiting to claim his sixth goal of the season.
He then went close with a header from a Hart corner delivery, but this time his effort flashed just wide of the post. However, the same routine was repeated on 32 minutes, and this time Wilde met Hart's cross perfectly to direct the ball into the net. Just a couple of minutes later, Kenny added Flint's third, when he raced onto a long ball from Dan Roberts, and this time made no mistake when faced with Jones, picking his spot expertly. Wilde then spurned a chance to bag a first half hat-trick when a clever shot struck the post.
Some frustration was now beginning to creep into a few of the Penrhyndeudraeth players, particularly their skipper Iwan Thomas, who had already been booked. He was very fortunate not to receive a second, when he needlessly got involved in some retaliation with Jack Kenny, after the Flint front man had fouled one of Lewis' teammates.
They did manage a rare sighting of the Flint goal when Aaron Griffiths hit a well struck long range shot, that just whistled over Jon Rushton's bar, but that was about as good as it got for the visitors in terms of direct efforts on goal.
Hart was proving lethal with his deliveries into the box, and he picked out Kai Edwards, who arched his body to meet the ball, but was just unable to direct it the right side of the post. Flint were ending the half well in command, and just before half time Jones was forced into making a good save, when Weir slipped the ball to Kenny, and the forward struck a decent shot from a tight angle on the right of the box.
As the second half commenced, the Silkmen were unable to recreate the same kind of momentum that they had ended the first half with, and the visitors enjoyed greater periods of possession, without really creating anything in terms of goal threats.
Shortly before leaving the action, Wilde had another opportunity to claim his hat-trick, but Jones managed to claw his header around the post on the hour mark. Manager Gibson then decided to shake things up for the remainder of the game, as Cadwallader, Telor Williams and Oliver Nugent were all introduced into the action in a triple substitution.
Kenny's heels were clipped inside the box on 70 minutes by Griffiths, and he took the resulting spot kick, but Jones sprang to his left to pull over a fine save, and keep the score at 3-0.
Flint were now shifting up a gear once more, as the game entered its final quarter. A couple of minutes after the penalty miss, full back Jake Phillips played a lovely ball into Ben Maher, who found himself in space inside the 18 yard box. He turned and dragged his shot just wide of the far post. Phillips was the provider again, this time for Cadwallader, when he picked him out with a long ball. Having got the better of his marker, "Caddy" shot just wide of the target.
However, he wasn't to be denied his first goal of the season for long. A free kick from the edge of the box on 86 minutes was floated over from the left by Maher, and Cadwallader popped up in the right place to guide his header into the net and celebrate his first appearance of the season with a goal.
There was still time to add to Flint's tally, as barely a minute later, Kenny got onto the end of Williams' ball and slotted past Jones.