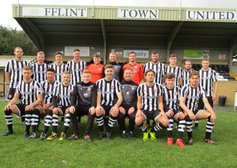 In a much improved display, Flint got back to winning ways, coming from behind twice before going on to grab the winner.

Manager Howard Tweats made 5 changes to last Saturday's starting line up, handing a debut to new signing Daniel Tranter , who rewarded him by scoring Flint's second goal.
The Silkmen set about their task with much more desire and appetite than was on display at Buckley, and even despite going behind twice, they never let their heads go down and kept going, eventually getting their reward.
Conwy had the first real chance after 5 minutes, when both Camden and goalkeeper Walker went for the same ball, only to lose out to Michael Thompson, whose shot from 12 yards out hit the side netting.
A Stewart Carroll corner led to Johnny Hill letting fly on the half volley with 12 minutes gone, and his effort was saved at the second attempt by Mackin in the Conwy goal.
Disaster struck on 21 minutes, when the Flint defence were caught flat footed and Jack Roberts raced clear to plant a low shot past Walker in the Flint goal. But unlike last weekend, Flint had more resilience about them tonight, and hit back 12 minutes later. Jamie McDonald fired in a great 30 yard effort that cam back off the cross-bar, but Stewart Carroll was alert enough to snap up the rebound and make sure the home side went in on level terms at half time.
On 48 minutes, Flint let slip a great chance to take the lead. Another Jamie McDonald effort was saved by Mackin, but he could only push it out to Axon-Smith, who rounded the stranded keeper, but then could only succeed in firing his effort across the face of the goal.
That miss proved costly, as Conwy retook the lead on 59 minutes, when Flint's defensive frailties were once again exposed, as Simon Everall was allowed time and space for a free header at the back post.
But to their credit, the Silkmen once again forced themselves back into the game, and debutant Daniel Tranter made his mark on 73 minutes, when he was in the right place at the right time to pounce on a loose ball rolling around in the Conwy box following a Carroll corner.
The comeback was well and truly complete on 78 minutes, when substitute David Walkiewicz fired in a powerful low shot from 14 yards out.
Flint may have added a fourth with 3 minutes remaining, when fellow substitute Gareth Roberts fired just wide with a shot on the turn from 12 yards out.
With much sharper and crisper passing and better use of the ball, tonight's performance was a vast improvement, and we can make the long journey to Llandrindod Wells in a much more positive frame of mind on Saturday.