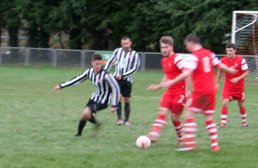 Flint's outside title hopes suffered a major setback as they lost 2-1 to basement club Rhayader Town.

After thoroughly commanding the game in the first half, the Silkmen's performance dropped alarmingly in the second period, allowing the hosts to come back and earn a deserved win.
Played on a bumpy pitch, with long grass, Flint set about their task with gusto in the opening period, and Stewart Carroll was at the heart of their most incisive play. New signing Anthony Dunleavey started up front, and on 16 minutes, he found himself played in by Carroll, who had orchestrated a fine attacking move. Rhayader keeper Ashley Roberts pulled off a good save from Dunleavey's effort on the edge of the box, and pushed the ball out for a corner.
From the resulting corner, though, Flint took the lead. Johnny Hill lost his marker, and headed goalwards into the path of Kyle Smyth who applied the final decisive touch to make sure the ball went over the line.
On 22 minutes, Carroll played another delightful ball over the top into the path of Dunleavey. He rounded Roberts, but as he fought off the attentions of a back tracking defender to get his effort on goal, Roberts did well to recover, and get back to his line to hack the goal bound shot away in the nick of time.
Flint continued to enjoy all of the possession for the remaining half, but did not seriously threaten to increase their lead, but nonetheless, looked in complete control.
Their backline had two enforced changes to their previous game, with both John Davies and Phil Doran being unavailable, and whilst the lack of attacking intent from the hosts in the opening period had failed to expose any deficiencies in this area, this was soon highlighted when the second half commenced.
Within 40 seconds of the restart, Rhayader had pulled a goal back. Carruthers found himself in bundles of space down the right, wasn't closed down, and had plenty of time to cross the ball to the edge of the box, where two of his team-mates were stood waiting unmarked, Gethin Jones took responsibility and fired a good shot into the back of the net.
Flint's midfield had been guilty of not tracking back with their runners, but perhaps had been caught cold at the start of the half. However, they couldn't be excused on 52 minutes, when Rhayader took the lead from an almost identical move, Again, a cross was played in from the right, towards the edge of the box, and thanks to more sloppy marking, Christian Jones was allowed plenty of space to steer his shot into the back of the net.
The transformation of the home side was remarkable, whilst Flint were paying the price for being too complacent, seemingly thinking the game was already won when they took the field for the second half.
Having been rocked by two goals in the opening seven minutes, some sort of response was required from the Silkmen, but it failed to materialise. Too many payers went missing, and were clearly not match fit, and some of the basics of the game were forgotten about. The shape of the back line was almost embarassing to watch at times, resembling a dog's hind leg rather than a proper back 4. Time and time again, Andrew Brown was getting caught too far upfield, leaving too much space in behind that was being exploited by the home side.
Rhayader continued to press forward, and on 62 minutes Dave Griffiths hit a snapshot that struck the Flint bar. A minute later, from a corner, Rhydian Davies, again unmarked, blasted in a shot that looked a certain goal until Ross Dalton proved equal to it, pulling off a good save.
On 68 minutes, Davies broke from the halfway line, easily outpacing a labouring Brown. He soon was bearing down on goal, and looked odds on to score. Somehow, Dalton managed to produce a fantastic stop, and flicked the ball up over his bar, to keep his side in the game.
Alas, his heroics proved to be to no avail, but they did at least serve for Flint to up the tempo in the closing stages, and pose some threat on the home goal once more. From a corner on 72 minutes, Russ Courtney powered in a header that looked to be the equaliser, but it was blocked and hacked clear, with the officials ruling it hadn't crossed the line. Then on 75 minutes, McManus tried to get on the end of a long ball played into the box, and during a tussle for possession with a defender, in which the latter appeared to control the ball with his hand before clearing, his claims for a penalty went unheeded.
Finally, with 1 minute left on the clock, Smyth produced a flick header from a ball played into the box, that beat Roberts in the Rhayader goal, only for a covering defender to clear off the line once more.
Perhaps, in hindsight, the introduction of some fresh legs from the youngsters on the bench may have paid dividends after the hour mark, when it was clear that many of the Flint players were extremely laboured. The absences of Simon Thelwell, Craig Jones and John Davies were all key to this defeat, as from front to back their influences were sadly missed.
Rhayader's 39 year old player manager, Dylan McPhee, must have had one of his easiest afternoon's in the heart of defence in a long while, as he was not put under any serious pressure from the lightweight Flint forwards. Similarly, our midfield was overrun in the second half, and runners were not being tracked, which in turn meant that our defence too often found themselves overwhelmed and out of shape.
Plenty of lessons to be learned from this defeat then, and hopefully they will be learned quickly, as we face another difficult away trip to Gresford next Saturday, where if we're not on our game, a similar outcome could be on the cards.