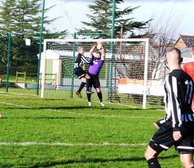 Defences on top at a blustery Clappers Lane

Chances were few and far between at a cold and windswept Clappers Lane, as Gresford and Flint fought our a goalless draw.

Flint had a much more solid look about them than the previous week, and were well organised only affording the hosts two real chances at goal during the whole of the 90 minutes. Defensively, they were well matched by their Gresford counterparts, who were well marshalled by the Peate brothers at the heart of their back line.
There was a strong, cold biting wind blowing down the length of the pitch, and Flint had the advantage of it at their backs in the first half. The home side concentrated on containing the visitors during the first period, just keeping one man up front, and rarely venturing out of their own half. Consequently, they were proving very difficult to break down, although Flint's midfield trio of Paul McManus, Stewart Carroll and Jack Abraham, who was operating as the more advanced of the three, did their best to break through the back line with a series of probing balls that sought to release Kyle Smyth.
The first chance was created after 24 minutes, when Abraham gained possession of the ball on the left side of the area, at the edge of the box. His well struck shot brought a flying save from Hill-Dunt in the Gresford goal.
The best chance of the half came on 37 minutes, when a defensive mix up by the home side allowed Smyth to nip through. His shot beat Hill-Dunt but unfortunately struck the post and bounced out.
The visitors must have earned at least half a dozen corners as a result of their intense attacking play during the first half, but could not take advantage of them, as the home side's defence were resolute.
The second half was a much more even affair, as Gresford now had the advantage of the wind and sought to gain the upper hand. To be fair to Flint, though, they still posed a threat at the other end, especially as the half wore on.
On 65 minutes, a long ball from Hill-Dunt found Owen Roberts, who sprinted clear of his marker to find himself one on one with Dalton in the Flint goal. But from a slightly wide position, his effort was well blocked by the Flint keeper at his near post.
With 10 minutes to go, a Roberts effort looked to be heading for the top corner, until Dalton produced a fine fingertip save to send it around the post.
On 82 minutes, Smyth played in a pacey ball from the right that found McManus, who elected to take it first time, but missed the target with his shot when well placed.
Two minutes later, another ball was whipped across the face of the Gresford goal, this time Carroll the provider, and Russ Courtney stuck out a leg but was unable to deflect it into the goal.
Right on 90 minutes another spell of Flint pressure saw Peate head the ball off the goal line, only for the ball to fall to Carroll, who fired it back in on goal as a couple of defenders came rushing out to face him. His shot clearly struck the arm of one of these defenders, but Flint's penalty claims were waved away, as either the referee did not have sight of it, or else decided that it was not intentional.
Over the course of a match played in extremely difficult conditions on a bobbly surface, Flint probably just deserved to edge it, but a combination of stout defending and not having the bounce of the ball fall for them at the vital time, meant they were unable to nick the all important goal. So although boss Aden Shannon may be disappointed at not coming away with all 3 points, he can at least be content that this performance was a vast improvement upon last week's.