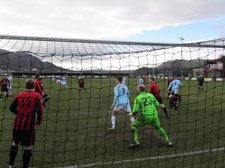 In the opening 20 minutes it was the home side who were on the front foot as they carved out a series of good chances, and Flint's goal led something of a charmed life as a combination of poor finishing and last ditch defending denied Port. Flint were guity of giving the ball away far too cheaply and were getting caught undermanned at the back as Porthmadog's midfield runners were overwhelming them.
With 8 minutes on the clock, Jamie McDaid broke through on goal but put his effort wide when well placed. It was to signal a poor afternoon in front of goal for the Port forward.
Four minutes later, a cross from the right presented another great opportunity for the home side, but Cai Jones flashed his header just wide.
These were the two stand out chances of the opening quarter of the match, but there were also several other half chances which fell to Porthmadog as they dominated the early exchanges.
With 25 minutes gone, Flint mounted their first serious attack, with a classy move, that ended with Kyle Smyth crossing to Jack Abraham, who wriggled past a defender before hitting a shot that Paul Whitfield in the Porthmadog goal did well to block. However, that was only to offer a brief respite, as a minute later, the Silkmen took the lead. Joe Culshaw, on his return to the club, headed a ball into the path of Smyth, who outpaced the covering defender, cut in on goal, and kept his composure to slide the ball past Whitfield into the net.
A defensive mix up shortly after from the home side, almost let in Smyth again, but the close attentions of a defender leaning into him, were enough to force him to put his effort just wide.
So after a shaky start, Flint found themselves in the ascendency, although they were still leaving a worryingly large hole in front of their back four that Port threatened to exploit.
As the second half commenced, the Silkmen looked to put the game to bed with a good 10 minute spell of attacking play.
On 47 minutes, John Davies won possession just outside the box wide on the right, following a corner. He ran into the area, evading a couple of challenges before being closed down, but managed to get the ball into the path of Smyth, whose shot from an acute angle hit the post.
With 54 minutes gone, Thelwell made a good run down the right, and crossed to try and find Smyth, but the ball just eluded him, and he had to run and collect it, before playing it back in from the other side and finding an incoming McManus, who elected to hit a first time volley that went just wide of the post.
Port were offered a way back into the match on 58 minutes, when Culshaw made a lunging tackle on Iwan Lewis judst inside the box, that referee Michael Gray deemed was worthy of a penalty. Ross Dalton produced an excellent diving save to deny McDaid, as he tried to convert the spot kick.
Flint had a big let-off on 69 minutes, when a cross from the right had split their defence, and substitute Julian Williams was presented with a gilt edged chance unmarked in front of goal, 6 yards out. His effort struck the post, before bouncing along the line and ending up in the grateful arms of Dalton.
An inspired substitution on 76 minutes gave the hosts a way back into the game. Subsitute Josh Davies had barely been on the field for 30 seconds when he got on the end of a cross to place a glancing header into the corner of the Flint net.
To their credit, the Silkmen showed great resolve to not let this setback affect them, and they pressed forward to try and get the winner.
With 7 minutes left on the clock, Anthony Dunleavey let fly from the edge of the box, but Whitfield was alert enough to pull off a good save to deny him.
With time running out, and just two minutes of normal time remaining, Gruff Williams conceded a free kick 25 yards out, picking up a booking in the process. Paul McManus conjured up a delightful curling effort, that sailed over the wall and into the top corner of the net, much to the delight of the travelling support.
Into added time, and Flint scored the killer third. McManus intercepted the ball, ran from the half way line, and closed in on goal. He could have easily taken the shot himself, but unselfishly squared the ball to substitute Joe Palmer, Flint Academy's exciting young talent, who cooly slotted it home to claim his first senior goal for the Silkmen.
Although the final scoreline may have flattered the visitors somewhat, this was nevertheless a tremendous performance at a ground where we have rarely came away from with all 3 points.
The only downsides to the victory being injuries to Stewart Carroll, who failed a fitness test int he warm up, and Russ Courtney, who had to come off in the first half after tweaking his hamstring.
A note of thanks should also go to the Porthmadog groundsman and his assistants who must have worked extremely hard to get this game on following the deluge on Friday.
This win should boost confidence for next week's League Cup game at Conwy, with a semi final place up for grabs.