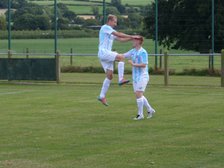 Flint get off to a Flying Start

Two late set piece goals gave Flint the perfect start, as they came from behind to claim all 3 points at Guilsfield

For much of the game, it looked as though Flint would return from Guilsfield pointless, as the hosts doggedly clung on to a seventh minute lead given to them by Mark Davies, but the game turned on its head in the last 6 minutes as the Silkmen struck twice to claim the spoils.
It took Flint quite a while to get into the game, and for long periods of the first half their midfield was too often overrun with players guilty of not tracking back, and inviting the opposition to run at our defence.
The hosts started the game brightly, and grasped the initiative, whilst Flint's unfamiliar starting line up struggled to get to grips with the game. A mix up in the visitors defence with two players going for the same ball, and neither one claiming it, let in Mark Davies after 7 minutes. He raced onto the ball, then cut in from the right to the edge of the six yard box, and blasted his shot past Ben Jones, to put the Guils one goal up.
This served as a bit of a wake up call for Flint, and two minutes later, Kyle Smyth (defying jet lag having just returned from Mexico earlier in the day) delivered a good ball in from the right onto the head of captain Mark Cadwallder, but his effort just cleared the bar. On 16 minutes, a Flint corner was half cleared, and the ball found its way back to taker Joe Culshaw, who by now was positioned on the angle of the 18 yard box. He hit a snapshot that had Guils' keeper Lee Andrew scrambling across his goal in order to keep the effort out.
Just before the half hour mark, Flint keeper Jones spilled a shot, but recovered well to deny Adam Jenkins who was following up.
With Flint's normal passing game having apparently gone AWOL, their approach play was ragged at best, and it looked as though their best chance of a goal would come from a set piece.
On 35 minutes, from a corner, Cadwallader saw his goalbound header bundled off the line by some desperate last ditch defending from the hosts.
Although they were very much second best in the opening period, Flint had nevertheless carved out some decent chances that they had been unable to take.
In the second half, they began to assert far more control on the game, and began to dominate possession, but their final ball was too often lacking in quality. Cadwallader almost caught Andrew out in the 51st minute, when, having received the ball from a throw in, he hit a shot from fully 25 yards out wide on the left, that beat Andrew but struck the bar.
Two substitutions made by Aden Shannon in the second half were to have a major bearing on Flint managing to turn the game around.
First, on came Stewart Carroll, who was able to exert his influence to knock the ball around to much better effect in the middle of the park, and he was followed by new signing Arkadiusz Piskorski, whose impact was instantaneous as he began a series of mazy runs that had the Guilsfield defence tied up in knots. One such run ended up in him laying a perfect cross across the centre of the goal, but a lack of anticipation from his teammates in the box, meant that the ball ran harmlessly across the 6 yard box.
Ben Jones kept Flint in the game on 68 minutes, when Mark Davies beat the offside trap and bore down on the Flint goal, but Jones made himself big and pulled off a great close range save.
A good run from Piskorski on 84 minutes resulted in yet another Flint corner. Culshaw hit a peach of a delivery aimed at the far post. It curled over the stranded Andrew and straight into the corner of the net, much to the delight of Flint's band of travelling supporters.
Now with their tails well and truly up, the Silkmen pressed for the winner. Piskorski collected the ball and again started to turn the Guilsfield defenders inside out on 88 minutes. He got to the edge of box, and unselfishly played the ball out to Cadwallader who had raced up to support him on his right. His cross from the edge of the box was blocked for a corner. This time rather than score, Culshaw was the provider, as his perfectly flighted ball found Cadwallader, who this time made no mistake with his header, to make it 2-1.
The home side tried to rally themselves, but Flint held firm to claim what ultimately was a well deserved 3 points at a ground where it's never easy to come away with a win.