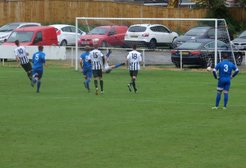 Flint ruthlessly put a hapless Mold Alex side to the sword, running in 12 goals without reply at Alyn Park

On a day it was pouring with rain, it was also raining goals as the Silkmen heeded Aden Shannon's pleas to play a more expansive game, and banished the disappointment of Wednesday night's defeat at home to Holywell, with a demolition of a sorry Mold side. Flint's cause was helped by some shambolic defending by the home side, but to their credit they took full advantage of the opportunities they were presented with, which has not always been the case so far this season.
With Stewart Carroll and Steve Cunningham missing out through injury, Chris Li and Johnny Hill were handed starts, and Danny Sullivan also came in for Luke Tyson who started on the bench. Li in particular made his presence felt throughout the game, putting in a tireless shift, and doing the ugly work for the benefit of his team-mates.
With barely 2 minutes on the clock, Mark Cadwallader flicked a Joe Culshaw corner into the net to give the Silkmen the lead. On 6 minutes, Richie Foulkes crossed from the left and Cadwallader was on hand again to head home.
Mold threatened after 8 minutes, following a free kick. James Preston escaped his marker to get free and put a header on target, which Ben Jones blocked, and then recovered brilliantly to keep out Preston's follow up from point blank range.
To be fair, in the early stages of the game, Mold did carry some threat up front, and Jones had to be alert to make sure his goal stayed intact. But at the back, their defence was all at sea, and one that Flint could seemingly pierce at will.
Flint's third arrived on 18 minutes, a great sweeping ball was played out wide to Culshaw, who cushioned the ball perfectly into the path of James Hooper, who brought it under control superbly and swept it past Nixon in the Mold goal.
Arkadiusz Piskorski, who came on for the injured Andy Brown, was the provider for Flint's fourth. He crossed into a crowded box from the bye-line, and, in the melee, Cadwallader looked to get the decisive touch to force the ball home and claim his hat-trick.
Mold threatened again on 27 minutes, when Preston hit a 20 yarder that Jones did well to tip over.
The home keeper, Eric Nixon, trudged off just after the half hour mark, whether it was injury related or something else was a moot point, as morale within the Mold players & coaching staff looked to be hitting rock bottom.
Great one touch play by Culshaw and Hooper, in the 36 minutes, resulted in Foulkes being played in on goal, but with the stand in keeper Luke Patterson going to ground early, he dragged his shot wide of the target. However, barely a minute later, he made no mistake, as Piskorski cut a lovely ball back into his path, and he hit a sweet shot from the edge of the box into the corner of the net.
Mold thought they had pulled one back five minutes before the break, when central defender Callum Lavelle got a firm header on a corner that was cleared off the line, with Jones, for once well beaten.
In the second half it was one way traffic, as Flint piled on the pressure and took the opportunity to improve their goal difference.
On 53 minutes, Sullivan neatly played in Cadwallader, who was right in on goal, but Patterson distinguished himself with a good save, when a certain goal looked on the cards. Unfortunately, the reprieve was only to be temporary, as a minute later, Culshaw hit a stinging half volley from just outside the edge of the box that crashed into the net.
In the last quarter of the game, Mold became extremely ragged, and Flint capitalised to the tune of six more goals, four of which were scored by substitute Kyle Smyth.
Foulkes turned provider on 70 minutes, slipping the ball into the path of Smyth who calmly slotted home. A minute later, Piskorski was brought down in the box by Danny Henegan, and Foulkes stepped up to send Patterson the wrong way, and score his second and Flint's eighth.
On 77 minutes, two substitutes combined to increase Flint's lead further. Luke Tyson delivered a lovely ball into the feet of Smyth who had the simplest of tasks to tap the ball home.
It was the same combination 6 minutes later. this time Tyson picked the ball up in the middle of the park, and released it into the path of Smyth who rounded the keeper and walked the ball into an empty net, to make it double figures for the Silkmen.
With four minutes on the clock, we were treated to what was probably the goal of the game. Centre back Ieuan Hewitt galloped forward, and was fed by Smyth, and then smashed it into the roof of the net from an acute angle.
In the final minute, Smyth put the icing on the cake with a delicate lob, following a patient passing move, that had the home side chasing shadows.
No doubt Mold's defenders will be having nightmares after this, whereas Flint will take a great deal of satisfaction from a high percentage conversion rate of goal scoring chances, as things suddenly clicked for Aden Shannon's side. It must also be said that the playing surface at Alyn Park was an absolute credit to the league, although it probably didn't do the home side any favours, as it allowed Flint to zip the ball about on a greasy surface with great accuracy.

Flint MOM - Chris Li (controlled the midfield, won every 50:50 ball, and set up the platform for the creative players to perform)