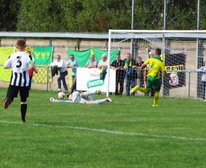 Caernarfon dominated the game from the start, and Flint were simply unable to get to grips with their opponents. Playing with three at the back, the Flint players looked ill at ease with the formation, which may have worked against Mold Alex, but Caernarfon were a different proposition altogether. In particular, Steve Cunningham found himself occupying a wide right role in which he was virtually anonymous for the first half, whilst the midfield trio of Danny Sullivan, Chris Li and Richie Foulkes spent most of the afternoon chasing shadows as the Caernarfon players knocked the ball around them.
The Silkmen gifted the Cofis the opener after just 2 minutes. Sullivan picked the ball up on the edge of his own box, and had more than enough time to clear the danger, but decided to try and play his way out, and was dispossessed. the ball then ran through into the path of Jamie Breese who gratefully accepted the opportunity that presented itself within the six yard box to slot the ball home.
On the quater hour mark, Darren Thomas struck a 25 yard effort that fortunately went straight into the midriff of home keeper Ben Jones.
Flint's formation was allowing the visitors acres of space down either flank, and this was exploited on 25 minutes, when Cory Williams galloped down the left, before cutting in towards goal. Ieuan Hewitt, in a desperate attempt to cover, brought down Williams, conceding a penalty. Visitors' skipper Nathan Craig struck what was a poorly executed spot kick, giving Jones every chance to save it, but the ball eluded him and finished in the net.
On 37 minutes, Li brought down Darren Thomas on the edge of the box, earning himself a yellow card in the process. Craig stepped up and bent his shot around the wall and into the goal far too easily.
With 3 minutes to go to the interval, Flint at last managed to test Paul Whitfield in the Caernarfon goal. Following a corner, Kyle Smyth got in a header that Whitfield blocked, but the rebound came back to the Flint man, and he was unable to force it over the line as the Cofi's stopper managed to smother it.
A poor start to the second period by the home side, once again led to them conceding an early goal. A Caernarfon corner was played into the heart of the Flint 6 yard box, and Gareth Edwards escaped John Davies to plant his header past Jones, who was seemingly stranded on his line, having made no effort to try and come and clear the danger.
On the hour mark, in an almost carbon copy of the first half incident, Li committed a foul just outside the box, got booked and Craig stepped up to score the free kick. Having picked up his second booking, Li saw red, and the Silkmen were reduced to 10 men for the remainder of the game.
Arkadiusz Piskorski had been introduced as a substitute for the ineffective Danny Sullivan earlier in the second half, and at least with him on the pitch, Flint carried some sort of attacking threat, which had hitherto been sorely missing.
The consolation goal for the home side arrived on 66 minutes, when Kyle Smyth received the ball on the right, and whipped in a quality ball across the face of the 6 yard box, which Whitfield could only push into the path of Jamie Hooper, who tapped it in.
With 15 minutes left, Craig scored his fourth of the afternoon, when he stroked home a ball that had been played into his path by Thomas who had escaped down the left.
It could have got even worse for the beleaguered Silkmen, as Thomas raced straight through the middle on 83 minutes, outpacing Hewitt and Culshaw, before hitting a shot past Jones that struck the upright.
As it was, the score remained at 6-1 to the visitors, in a game which exposed the gulf between the two sides and left Flint's aspirations of title contenders seemingly in tatters.
After the match, Aden Shannon made a point of apologising to a group of Flint supporters for the abject performance they had just witnessed. It will be interesting to see what reaction there will be against Ruthin on Wednesday night.