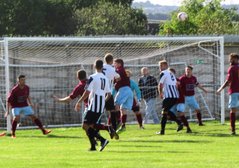 What a difference a week makes. Shrugging off the disappointment of last week's game, Flint put in a text book performance to secure a convincing win.

Starting with four across the back, and with Steve Cunningham being returned to his favoured central midfield role, the Silkmen looked much more solid and comfortable. With John Davies and Ieuan Hewitt imperious in central defence and the impressive Cunningham, ably assisted by the returning Chris Li, adding some bite in midfield, Flint made sure that their opponents had no time on the ball, and didn't give them chance to settle into their stride. Richie Foulkes put in an early effort on the Holyhead goal with barely a minute on the clock, as Flint signalled their attacking intent, his effort going just wide.
Shortly after, Joe Culshaw delivered a dangerous inswinging corner, that Hotspur keeper Connor Hughes did well to punch out from underneath his bar.
The visitors got an unexpected sight of goal after 5 minutes, when a poor clearance ended up with Peter Jones having a run at the Fint goal but he dragged his shot well wide of the target.
From then on, it was pretty much one way traffic for the rest of the half, as Flint controlled play, and at times footballed their opponents to death, as they searched for the vital opening.
Culshaw thought he had broken the deadlock on 13 minutes, when he hit a cracking first time effort from the edge of the box, that smashed against the post.
With 10 minutes to the break, Flint made the breakthrough. The busy James Hooper took possession of the ball wide on the right, and delivered a dangerous cross into the box that was just above knee height. Kyle Smyth reacted well, and stooped down to get a little glancing header on the ball that sent it beyond Hughes and into the corner of the net.
Flint continued to press, and on the stroke of half time, Culshaw let fly with another effort from 25 yards, that just cleared the bar.
Into the second period, and the Holyhead players who had come out of the dressing room extremely early, had much more purpose about them as they sought to get back into the game.
Nevertheless, the first chance fell to Flint, when on 50 minutes a Luke Douglas cross caused panic in the visitors' box, when Brendan Hogan, in attempting to clear, horribly miscued his effort, and sent the ball spinning towards his own net, but fortunately for him, it went over, rather than under, the bar.
Just a minute later, Ben Jones produced the save of the match to preserve Flint's advantage. Having been under-employed up to that point, he showed his concentration was still sharp, when he reacted brilliantly to get down low to his right and flick out an arm to deny Jack Griffiths, whose run had beaten the Flint offside trap, and was in on goal.
Just before the hour mark, a Culshaw free kick from wide on the left was palmed out by Hughes. Cunningham picked up the ball just outside the box and drilled it back in. The ball struck the arm of Dewi Thomas who was running out to try and close down the Flint skipper, and the referee had no hesitation in pointing to the spot. Richie Foulkes stepped up to firmly plant the ball in the corner of the net, just beyond the reach of Hughes, who might well have got a touch to it, but was unable to keep it out.
The Holyhead keeper distinguished himself twice in the space of a couple of minutes shortly after, with two great reaction saves to deny Kyle Smyth on each occasion.
On 68 minutes, Douglas, from wide on the right, delivered an inviting ball into the heart of the danger area, and Hooper as on hand to outjump his marker and deliver a bullet header into the net that gave Hughes no chance to stop.
The scoring was completed 10 minutes before the end when Hooper chased a long ball that was delivered into the corner, doing extremely well to keep the ball in play. He then looked up and delivered a perfect cross onto the head of substitute Andy Brown, who gratefully accepted the chance to make it four for the home side.
Hotspur thought they had at least scored a consolation goal on 89 minutes, when Robert Llewellyn-Jones made a good break, drew Jones out then squared to fellow substitute Callum McMinimee, who was faced with an open goal. As his shot headed to the goal line, seemingly out of nowhere, came Ieuan Hewitt, who succeeded in hacking it clear for a tremendous clearance, that brought almost as big a cheer from the Flint fans as any of the goals earlier in the afternoon.