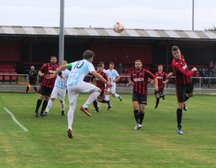 Flint leapfrogged their opponents and climbed to third place in the table after claiming a 2-0 win at Y Traeth.

The match between 3rd and 4th in the Huws Gray Alliance certainly lived up to its billing, as supporters were treated to an entertaining game between two well matched sides. In securing the three points, the Silkmen rode their luck at times, but a combination of more clinical finishing and some inspired goalkeeping by Ben Jones, proved the difference on the day.
Flint signalled their intent with just two minutes on the clock, when Kyle Smyth broke down the left, before pulling back an inviting ball for Mark Cadwallader to run onto, but his rising shot cleared the bar.
However, five minutes later, Flint did find the back of the net. A Joe Culshaw corner was delivered onto the head of Andy Brown, and he planted a firm header beyond Tyler French in the Port goal, from 10 yards out.
In the remaining first half period, the Silkmen almost undid their good early work on three separate occasions, when poor square balls just outside the 18 yard box were seized upon by their opponents. Fortunately, each time, it came to nothing, as either covering defenders came to the rescue, or else Ben Jones dealt comfortably with the resulting shot.
Just after the half hour mark, a long throw was flicked on by Johnny Hill to Ieuan Hewitt, but French got across his goal well to save the resulting header.
Some neat interplay on 41 minutes almost led to the Silkmen doubling their lead. James Hooper and Kyle Smyth combined well down the right hand side, and Smyth slid a perfectly weighted ball into the path of Cadwallader, who had raced unmarked into the area. With only French to beat, he placed the ball wide of the target, much to the anguish of the Flint supporters.
As expected, Port came out all guns blazing in the second period, and for the opening 10 minutes or so, subjected the Flint goal to some sustained pressure.
Two minutes in, Chris Jones got the better of Culshaw and played in Jamie McDaid, but his shot just cleared the Flint bar. A minute later, and Flint had a big let off, as hesitancy in their defence, meant a loose ball wasn't cleared, and it fell to Jones, but he pulled his shot wide from a good position.
Having withstood this onslaught, Flint looked to get back into the game as an attacking force, prompted by the impressive Levi Mackin in midfield, who is now looking increasingly comfortable in his role.
With 57 minutes gone, Cadwallader foraged for the ball in the left corner, and to his credit did well to win possession, breaking along the bye line and firing the ball into the Porthmadog box. This set up a series of chances for Flint within the space of about 30 seconds, all of which were either blocked or mishit, until the ball was cleared to just beyond the 18 yard box, right into the path of the lurking Joe Culshaw. He curled a sublime effort around a crowd of players and into the very top corner of the Port net, giving French absolutely no chance of making a save, for a fantastic goal.
However, there was still just over half an hour left of the match, and this was the signal for Port to up the tempo once more and try and get back into the game.
On 65 minutes, Ceri James delivered an inviting ball into the Flint box, which Chris Jones met with a powerful header, that looked a certain goal all the way, until Ben Jones once again demonstrated his great reflexes and got across to paw the ball out. Fortune was on Flint's side as the loose ball bounced around in the centre of the 6 yard box, but no Port player could get any meaningful contact on it, and it was finally cleared to safety.
Ten minutes later, and Jones was called upon once again to repeat his heroics. This time, it was a Tomos Clarke header that looked as though it was in, until Jones stuck out a strong hand to push his effort onto the post.
From then on, Flint managed to hold out fairly comfortably for the remainder of the game, spurred on from strains of "The Yard" sung by their travelling supporters, until added on time, when a Gruff Williams free kick struck the cross bar, to underline it just wasn't Port's day in front of goal.
So a packed bus full of happy players and supporters made their way back from the scenic surroundings of Y Traeth, delighted with coming away with all 3 points, in a performance full of character and great team spirit. The only downside being the lamentable efforts of the players on the "open mic" session on the coach on the way home !

Flint MOM- Levi Mackin (an assured and composed performance over the 90 mins just edged him ahead of teammates Ben Jones, John Davies and Ieuan Hewitt)