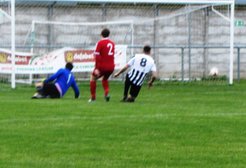 Strength of character shines through as Flint win again

Despite being pulled back to 1-1, Flint showed great resolve to kick on again, and in the end deservedly ran out 3-1 winners

This game had the prospect of being a potential banana skin for the Silkmen, as they sought to build on last week's win at Porthmadog. Denbigh manager Gareth Thomas has been busy adding more quality to his squad, as they seek to recover from a poor start, and they enjoyed a morale boosting draw with Prestatyn last weekend.
Indeed it was the visitors who started the match the brighter, and were knocking the ball around well during the opening ten minutes or so, without really troubling Ben Jones' goal. Ieuan Hewitt was called upon early doors to deliver a crunching tackle that stopped a promising Denbigh move in its tracks, and signalled the hunger and desire that was evident throughout the Flint side.
Levi Mackin and Steve Cunningham gradually started to get on top in the middle of the park, and that was the catalyst for Flint to start taking the game to their opponents. On the quarter hour mark, a Joe Culshaw corner was delivered to the back post to an unmarked Mark Cadwallader, but his effort from a narrow angle went the wrong side of the woodwork from a Flint point of view.
On 21 minutes, andy Brown showed good determination to get to the bye line, before pulling an inviting ball back across the face of goal. But Kyle Smyth was slightly on his heels, allowing a Denbigh defender to get in first and prevent what otherwise would surely have been a simple tap in.
Denbigh had a sighting of the Flint goal a minute later, when Aaron Hassel tried to catch out Ben Jones with a cheeky lob, but the ball sailed over the bar as the Flint keeper covered his goal.
The Silkmen took the lead on 25 minutes. Play was switched from left to right, and James Hooper won possession before feeding the ball into the path of the supporting Ieuan Hewitt, who advanced just inside the box, before drilling an accurate shot into the corner of the net.
Just before the half hour mark, Hooper hit an excellent shot on the turn, that forced Denbigh keeper John Hodgin into making a fine fingertip save to push the effort over the bar.
Hooper was presented with an even better chance a few minutes later, when Smyth delivered a great ball over the top into his path, and he found himself one on one with Hodgin. However, his attempted lob was not quite deft enough, and the ball cleared the crossbar, as another good chance went begging.
Whilst there was only the one goal between the sides, Denbigh were still very much in the game, and on 33 minutes Phil Molyneaux beat Culshaw to the ball, and crossed to dangerman Alan Bull, who turned and hit a shot that Jones parried.
Into the second half, and on 54 minutes, the excellent Hassel produced a sublime bit of skill on the ball to create space for himself, before releasing Guto Hughes down the left.He delivered a perfect cross to the unmarked Bull on the edge of the 6 yard box, but he somehow spurned this gilt edged opportunity, and put his shot wide of the Flint post.
Unfortunately, the Silkmen didn't learn their lesson from that narrow escape, and were caught flat footed from a quick throw in on the hour mark. The ball was hurled into Ant Williams, who was in plenty of space on the edge of the box, and he had far too much time and room to hit a quality strike into the Flint net.
Whereas in recent seasons, this blow might have proved fatal, there is a new found resolve in the Silkmen at the moment, and they quickly hit back to regain the initiative.
On 63 minutes, Hopper lost his marker and hit an excellent goalbound effort that Williams did well to block. However, the reprieve was only temporary, as a minute later, a throw in from Brown was helped on its way into the danger area of the 18 yard box by Johnny Hill, and Hooper was on hand to smash the ball past Hodgin into the net.
The game was effectively made safe on 69 minutes, when Smyth played a slide rule ball into Hooper, who had his back to goal, and the close attentions of a Denbigh defender to contend with. As he tried to bring the ball under control, it ran away from him, but straight into the path of the incoming Andy Brown, who just got to it before a defender, and slotted the ball home.
Denbigh made a fist of trying to get back into the game once more, and on 72 minutes, Bull was through on goal, but Jones sprinted off his line and smothered the effort.
With seven minutes to go, the dangerous Hassel broke through and shot from an acute angle, but Jones was on hand once more to make the save, and shovelled the effort around the post.
As the game edged into stoppage time, a Flint counter attack saw Smyth release Louis Austin, who cut in on goal, but his shot curled away from the target.
it was important that we built on last week's win with another 3 points, although it was never going to be easy against an improving Denbigh side, and to their credit the Flint players delivered, to maintain their current good run of form.