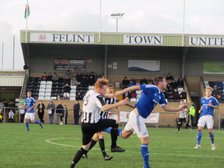 Flint still seemed to be suffering a Welsh Cup hangover with a disjointed first half performance, which all too often saw them resort to hopeful long balls, that resulted in gifting possession back to the opposition.
Caersws took the lead on 7 minutes, when a corner was half cleared back to the corner taker, and when it was crossed back into the box, the powerful Craig Harris slipped his marker to head home unchallenged.
In this opening period, Flint were very much second best, and they were unable to keep the ball for more than a couple of passes, with poor distribution or the aforementioned aimless long balls meaning that Kyle Smyth and James Hooper were having to live off scraps and were unable to trouble the Bluebirds' defence.
The home support were giving vent to their frustration at the paucity of the Silkmen's play, when, out of nowhere, they suddenly put together their best move of the match on 25 minutes, and were rewarded with a goal. Kyle Smyth got a deft flick on the ball, to knock it into the path of Richie Foulkes. He in turn, found Hooper in space on the left, and the Flint forward ran in towards goal, and, showing great composure, shot low past Caersws keeper Callum Hawthorne.
Flint's haphazard approach to the game almost cost them on 34 minutes, when a sloppy passage of play ended up with the ball being played to Johnny Hill, who under challenge from Sean Evans, missed his clearance and let in the Caersws hitman, but his shot was easily collected by Ben Jones in the home goal.
Joe Culshaw made a good run down the left a minute later, and whipped in a great cross across the face of the 6 yard box. Unfortunately, Louis Austin failed to get any meaningful contact on the ball, when well placed, and the chance went begging.
Flint roused themselves out of their slumbers in the second half, and started to play much more constructive football, but for all their possession, were unable to force Hawthorne into making any telling saves.
On 56 minutes, Ieuan Hewitt won the ball inside the visitors half, and played it into Stewart Carroll, who had replaced the injured Foulkes late in the first half. Carroll showed a lovely bit of skill that the game had hitherto been missing, as he produced a nice flick into the path of Smyth, but his shot went wide of the target.
Just after the hour mark, Carroll was once again the provider, when a slide rule pass released Austin into the area. Hawthorne raced out to meet him, and Austin delayed getting his shot away, instead electing to round the keeper, but he was forced wider than intended, and ended up on the bye-line. He looked up, and pulled the ball back to the incoming Smyth, whose first time effort from a central position finished high over the bar.
Andy Brown was introduced into the fray with 20 minutes left, and immediately made his presence felt, putting the Caersws defence under pressure. But despite all of their possession, and their nice approach play, Flint were still unable to force Hawthorne into making any meaningful saves of note.
There was a growing sense of dread amongst the home support, that Caersws, having soaked up the pressure, would spring forward and score, and their worst fears were realised with seven minutes remaining. The home side lost possession of the ball on the right side of midfield, and a ball was played up the dangerous Craig Harris, who had John Davies for company. Unfortunately, Davies made an uncharacteristic error, that let Harris in for a run on goal, and he took full advantage of the absence of any covering defenders to plant a firm shot in the net from 18 yards.
On 87 minutes, the Bluebirds caught Flint out at the back once more, this time Joe Culshaw losing out to the trickery of Sean Evans, who finished with a delightful lob into the goal.
It was somewhat ironic that having upped their game substantially from an awful 1st half performance, they conceded two goals in a second half they largely dominated to lose the game. But credit to Caersws, they played to their strengths and took their chances, and in Sean Evans and Will Thomas they have a couple of skilful and streetwise players who pose a real handful to the opposition defenders.