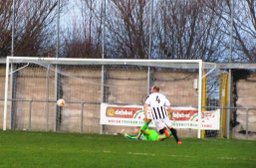 Flint get some Festive Cheer

Flint recorded their first win in 5 games, against an industrious Conwy side, who will feel aggrieved they came away with nothing to show for their efforts.

Conwy set up with forward Neil Harvey in the middle of defence, as he covered for the suspended Chris Quin. He had an excellent first half, successfully repelling everything Flint could throw at him, along with fellow centre hallf Tom Morris. James Hooper had an early sight of the Conwy goal when a ball was played into him on the edge of the box on 3 minutes. He hit a curling shot that went just wide of the upright. After that, the game developed into a war of attrition between both sides, with neither keeper being called upon to make any saves.
The visitors managed to fashion a good chance after 21 minutes, when following a free kick delivered from the left, Morris swung at the ball as it was played in, and hit a volley over the bar.
Flint forced the first corner of the match just before half time, and Stewart Carroll floated the ball over to Chris Roberts, who was unmarked in a good position. But he couldn't find the target with a free header.
Both sides made substitutions at the start of the second half, with Andy Brown coming on for the home side to provide a much needed focal point at the tip of the Flint attack. For the visitors, Harvey was restored to his normal centre forward role, following their reshuffle, as they clearly thought the game was there for the taking.
Conwy upped the tempo, and took the momentum of the game, as many of the Flint players looked tired and leaden footed. On 55 minutes, Danny Cross broke clear, and Ben Jones had to come racing off his line and spread himself well to block the shot. The loose ball fell to Joe Chaplin, and his follow up shot was well cleared off the line by Matty Holt. That should have served as a wake up call for the complacent Silkmen, but they didn't heed it, and paid the price 5 minutes later.
Chaplin found himself one on one with Jones, and the Flint keeper pulled off another excellent reaction save to deny him, but his defenders let him down, as they failed to successfully clear the ball, and instead allowed Danny Cross to steal in and score from 8 yards.
After that setback, Flint at last found some urgency in their play. They reverted more to a flat back four at the back to tighten things up, and give themselves a bit more punch in midfield.
The equalising goal came somewhat out of the blue, and arrived on 68 minutes, as up until then, the home side had shown no signs of troubling Scott Williams in the Conwy goal. The ever willing James Hooper made good inroads down the left and delivered the ball intot he box. Andy Brown made a nuisance of himself, and forced the ball into the path of Kyle Smith, who got away a shot that was aimed for the right hand of the goal from the keeper's perspective. Williams looked to have it comfortably covered as he dived across to his right, but the ball took a wicked deflection from a Conwy defender en-route and finished in the opposite corner, as it gently rolled over the line.
This gave Flint the lift they badly needed, and shortly after Stewart Carroll hit a shot that just cleared the bar.
Following a corner on 77 minutes, Smyth connected with a bullet header, that looked destined for the back of the net, until an excellent clearance from a defender on the line deflected it onto the bar and away into the path of Chris Roberts who was unable to keep the ball down, and his effort went over.
The winning goal arrived on 79 minutes, from a free kick played in from around the half way line on the left. The ball was delivered into a crowd of players in the Conwy box, and the alert Smyth was quickest to react, sticking out a foot to direct it into the corner of the net.
Flint then successfully ran the clock down and saw the game out to earn a much needed 3 points.
We can now look forward to our derby encounter with Holywell on December 27th, although we shall need to display a much higher level of intensity over the full 90 minutes if we are to come away with a result from that one.
Finally, It's also worth noting the performance of referee Cheryl Foster. Very often match officials are highlighted for the wrong reasons, but she handled the game in an unfussy, straightforward manner, displaying a common sense approach and getting all of the main decisions spot on. Let's hope some of her male counterparts take a leaf out of her book in future !

Flint MOM - Kyle Smyth (just edged it over fellow striker James Hooper, as he conjured two goals out of nothing on a day when Flint were lacking creativity in their play)