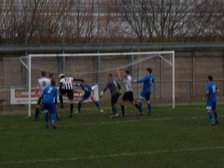 It's Three 'N' Easy for Flint

Flint started 2017 just like they finished 2016, scoring 3 goals and securing a comfortable victory.

To be fair, they faced a much more organised and disciplined Mold side than than which they beat 12-0 earlier in the season, but there was always the probability that eventually the visitors would run out of steam and Flint would overrun them, and so it proved.
For much of the first half, defences were very much on top, and Mathew Hughes and Alex Weatherby at the heart of the Mold defence proved to be a stubborn obstacle that Flint found hard to break down.
On 12 minutes, Richie Foulkes did manage to find himself in space for a free header that looped over Alex keeper Mike Jones and looked to be heading in the net, until it struck the post and bounced out.
Just before the half hour mark, some good interplay by Flint carved open the Mold defence, with Foulkes playing in James Hooper, who hit a shot from a tight angle on the right, that Jones did well to get his fingertips to and force onto the crossbar and over.
On 35 minutes, Kyle Smyth played a slide rule ball into the path of Hooper, who this time attacked from the left side of the box, but once again he was denied by the woodwork, as his shot stuck the angle of post and bar.
With 2 minutes to go to the break, Flint managed to secure the breakthrough. From a free kick wide on the left, skipper Stewart Carroll floated a teasing ball in that caused all sorts of problems inside the Mold box. A quick bout of head tennis resulted in Andy Brown lunging in to head the ball over the line to give the Silkmen a deserved half time lead.
Carroll played an inch perfect ball to release Hooper on 50 minutes, but as he ran in goal, his effort was charged down. The ball eventually ran back into the path of Carroll, whose accurate effort forced Jones to pull off a good save for the visitors. Three minutes later, and Jones was called upon to produce an even better save. Brown did well to win the ball, and flicked it into the path of Smyth, who pulled the ball back across goal to set up Foulkes, but his effort was blocked. The ball then ran to Hooper whose goalbound effort was excellently kept out by Jones. Moments later, Smyth flicked a header that agonisingly went just wide of the target from a Flint point of view.
The second goal that the Silkmen had been threatening arrived on 57 minutes. Foulkes laid the ball back into the path of Ieuan Hewitt, who swung the ball into the box, forcing Jones to block it, but Brown was on hand to snap up the loose ball and crash it into the back of the net.
It took the visitors until the 63rd minute to register their first real noteworthy effort on target, when Ant Williams hit a long range effort that just cleared the Flint bar.
Two minutes later and the game was effectively over, as Flint scored their third. Hewitt was once again the supplier, as he received the ball, then demonstrated a great piece of trickery to earn himself some space, before playing a killer ball across the face of goal that gave James Hooper the easiest of tap ins.
Flint had been so much in control up to this point, that perhaps a bit of complacency crept into their game. From a Mold corner on 75 minutes, Williams received the ball unmarked and got in a shot that just went wide of the post. Then 5 minutes later, they grabbed what proved to be a consolation goal. Flint will be unhappy with the way it materialised, as it stemmed from a throw for the home side, from which the Alex won possession, and sprang forward with a counter attack. The ball was played into Sam Richards on the edge of the Flint box, but he delayed getting off his shot, and the danger looked to have passed, but the defence were slow to clear the ball, and then Lee Jones got possession of it and drilled it into the corner of the net.
Flint almost had the last say on 88 minutes, when quick thinking from Carroll from a free kick almost caught the Mold defence unawares, but his set piece stuck the post and so he was denied the goal that his performance deserved.
It was another excellent team display from Flint today, with players filling in for one another when required, and some lovely flowing football to be witnessed going forward.
The game also benefited from some common sense (some might say lenient) refereeing from Andy Harms, who showed the kind of approach that was ideally suited to a derby match.

Flint MOM - Stewart Carroll (back to his instrumental best)