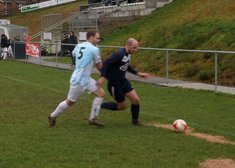 Flint missed the chance to close the gap on second placed Caernarfon, as they too had to settle for a share of the points, despite leading three times

On a very heavy pitch, that resembled a quagmire in places, both sides took a little time to adjust to the conditions. Gradually, Flint settled into their task, and seemed to be gaining the ascendency, but they suffered a setback on 15 minutes, when Andy Brown had to depart the action after pulling his hamstring. However, just three minutes later, they opened the scoring with a penalty. Chris Li conjured up a lovely little through ball into the path of Richie Foulkes, just outside the box. Foulkes, who had been pushed into a more forward position following the loss of Brown, advanced inside the area, but was then bundled over. He picked himself up to score from the spot.
On 24 minutes, a Stewart Carroll ball was flicked on by Foulkes into the path of James Hooper, whose on target effort forced Llanfair keeper Chris Brown to push it around the post at the expense of a corner.
The home side had to wait until five minutes before the break, before testing Ben Jones in the Flint goal. A long throw found its way to Nashawn Blake about 6 yards from goal. he got his shot away, but Jones was down quickly to collect his effort.
So in a largely subdued first half, there was little sign of the goal fest that was to occur in the second period, although with the conditions the way they were, there was always a chance that the pitch would play its part.
Flint started the second half in a positive vein, looking to grab the decisive second goal, and created a series of half chances that were either blocked or comfortably saved by Brown. Then, against the run of play in the 53rd minute, Llanfair sprung forward with an excellent counter attacking move down the left, that resulted in a ball being pulled back to Marc Jones just outside the box. The left back hit a crisp shot that flew into the back of the net.
Just 2 minutes later, though, the Silkmen got their noses back in front, when Hooper seized upon an underhit back pass on the sticky pitch, and slotted the ball past Brown.
There then followed a period of sustained Flint pressure which could have killed off the game with a bit more luck in front of goal. On 61 minutes, Hooper broke through the defensive line and unleashed a shot that just crept wide of the target. Then on 66 minutes, a series of chances were blocked by the overworked Llanfair defenders, only for the ball to break to Hooper who hit a snapshot on the turn that looked a goal all the way, until it struck the foot of the post.
Llanfair made the most of this let off, and equalised again with 20 minutes remaining. Again the move was a result of a counter attack, with the home side moving the ball quickly forward in a manner that meant the Flint defence were always struggling to get their shape. The attack came once more down the left, and at first, the danger appeared to have been averted, as the ball was cleared over to the right, where it was picked up by substitute Mathew Spencer. He delivered an excellent cross that swung away from Ben Jones, and allowed James Daniel to nip in and plant a close range header into the back of the Flint net.
To their credit, Flint upped their game once more, and thought they had scored the decisive goal on 83 minutes. Brown came racing out of his goal to clear a loose ball, but miscued his kick, and Hopper pounced on it, and was able to steer it into the unattended goal from around 22 yards.
But the lead lasted barely a minute, as a rash trip on Daniel, just a matter of inches inside the penalty area resulted in a second spot kick of the game being awarded, this time to the home side. Paul Griffiths took responsibility and struck a firm shot into the net.
As the clock ticked down, Flint desperately tried to find a winner, and Kyle Smyth looked to have got it until a great last ditch challenge blocked his shot.
Whilst ultimately this may be regarded as two points dropped, given that we had the lead on three separate occasions, at least we can take some solace from the tone of the display, where we were prepared to roll our sleeves up, adapt to the tricky conditions and put in a shift. However, some gutsy defending from the home side when they were under the cosh, and some decent counter attacking play when they were gifted the opportunity, meant we just couldn't force home our advantage and open up what surely would have been a telling two goal lead.