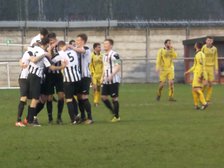 Despite having been reduced to 10 men with over half the game still to play, Flint defended resolutely to protect their lead, and even added to it

The visitors came out of the blocks with a sense of purpose, and carved out the first chance on 3 minutes. Louis Irvine was allowed the freedom to run through the middle of the park, before unleashing a shot from just outside the area that Ben Jones had to get down to, and push away for a corner.
Flint had started the game sluggishly, and the quick interpassing of Guilsfield was causing the home side plenty of problems, but fortunately for the Silkmen their opponents were unable to capitalise on their good approach work. Eventually, after about quarter of an hour, Flint managed to find some fluency of their own, and the game became a much more even affair, with both sides moving forward with purpose, but unable to find the finishing touch.
Ironically, the opening goal for Flint came about from a swift counter attack following a Guilsfield corner. The Guils elected to take a short corner, hoping to catch the home side napping, but fortunately Ieuan Hewitt was alert enough to win possession on the edge of his box. He then looked up, and delivered an excellent ball to release James Hooper, who found himself through on goal with only Dave Littleford to beat. Hooper attempted to lob the Guilsfield keeper, but Littleford managed to parry his effort, only for the ball to fall back into the path of Hooper, who made no mistake at the second time of asking.
Hooper had a great chance to double the advantage on 33 minutes. Another fine ball from Hewitt, this time released Kyle Smyth down the right, and he delivered an excellent ball into the area, that eluded both goalkeeper and defenders and found Hooper 6 yards out. But his first time effort was hit straight into the grateful arms of Littleford, as the rest of the goal was gaping.
Shortly after this, Flint were dealt a couple of blows in quick succession. First, Chris Li departed the action with what appeared to be a hamstring problem, and then on 35 minutes, Hooper received a straight red card for aiming foul language at one of the linesmen following a contentious offside decision.
What had started to develop into a fine game of football between two like minded attacking sides, was adversely impacted by this imbalance in numbers, as Flint understandably looked to consolidate their position and try and frustrate the visitors.
The Silkmen carved out another good opening just before the break, when a Smyth cross picked out Richie Foulkes just beyond the far post. He tried to direct a header back into the path of Mark Cadwallader, who was well positioned in the centre of the goal, and would surely have made it two, but for the well timed interception of a Guilsfield defender, to deny the Flint player the opportunity.
At the start of the second half, the Guils attempted to make their numerical advantage count, as they set about their task with gusto. However, despite some good attacking play, they were lacking effectiveness and inventiveness in front of goal, and some good balls played across the face of the box, were not seized upon.
Having weathered this early storm, Flint managed to break out of their own half, and were rewarded on 53 minutes when they claimed the decisive second goal. It came from a free kick to the home side, which was taken by Hewitt just inside his own half. He delivered the ball into the opposition box, and it was cleared to just outside the area into the path of Levi Mackin, who killed it with one foot, before sidestepping, and switching it to his other, and then calmly placing a shot into the corner of the net.
Despite well over half an hour of the game still to play, the Flint goal was relatively untroubled, as the back four gave a master class in shutting the opposition out, aided by the efforts of the midfield and the tireless running of Foulkes and Smyth up front. On the odd occasion that Guilsfield did manage to penetrate the Flint rearguard, Ben Jones was able to make routine saves from what were fairly weak efforts.
With Caernarfon having dropped two points in their draw at Penrhyncoch, it means we have now closed the game to the second placed club to three points.