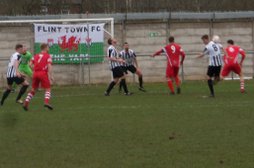 A subdued Flint just do enough to claim the win

A strangely lacklustre Flintshire derby, in many ways reminiscent of the first meeting between the sides, ended with Flint claiming the spoils.

For too much of the game the ball was seemingly in the air or out of play, with very little football being played on the deck, although the bobbly pitch may have perhaps played a part in that.
The visitors signalled their intent from the kick off, with a long ball played down the pitch on the left flank, a la a rugby union restart. This set the tone for the opening half an hour or so, with Flint seemingly being drawn into the long ball tactic being favoured by their opponents. John Davies did well to contain the threat of Buckley's centre forward Asa Hamilton, and neither goalkeeper was seriously troubled to have to make a save of any note.
Hamilton did manage to get clear of his marker on 28 minutes, when he got on the end of a decent cross sent in from Jacob Evans on the right, but from a good position he headed over the bar.
Flint eventually managed to shake themselves out of their lethargy, and forced the first save of the game on 33 minutes. Chris Li played a good ball into the feet of Andy Brown, who received it with his back to goal. He did well to shrug off the attention of two markers, and turned to unleash a shot on goal that Buckley keeper Adam McGee just about managed to keep out. However, this respite was short lived, as the Silkmen took the lead a minute later. Adam Eden conjured up an excellent cross from the left, and Brown timed his run well to get the faintest of flicks on the ball, that directed it over Magee and into the net. A rare moment of quality in a dull game.
For most of the second half, Flint seemed content to sit on their lead and contain the threat from the visitors, so much so that Brown all too often found himself isolated up front, with little or no support. There was always the danger that Flint were leaving themselves open to an equaliser, although their defence were generally on top, and protected Ben Jones' goal reasonably well.
When Flint did have some decent possession in the visitors' half, it paid dividends on 65 minutes, as they scored the vital second goal, Brown won possession of the ball, and this time he did have some support, as he played the ball into the path of Richie Foulkes who broke into the box. Foulkes took the pass in his stride and stroked his shot across McGee into the corner of the net.
It was a game that will live short in the memory, but on the plus side we gained the 3 points and kept a clean sheet.