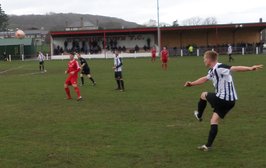 Flint given a lesson in Finishing

In a game where plenty of goal scoring chances were created by both sides, Denbigh proved to be the more clinical.

A heavy Central Park pitch witnessed a good end to end contest for the opening half an hour or so, but whereas Flint fluffed their lines in front of goal (partly it has to be said due the excellence of John Hill-Dunt in the home side's goal), Denbigh ruthlessly took theirs to open up a commanding three goal lead.
The first opportunity went Flint's way after just 2 minutes, when Andy Brown showed some great close ball control, after picking the ball up on the edge of the box, and jinked his way past a couple of defenders to make inroads into the box, before shooting into the side netting as Hill-Dunt came out to meet him.
Then Denbigh danger man Alan Bull had his first sighting of goal two minutes later, when he struck a good 20 yard effort just wide of the Flint post.
The home side went in front on 6 minutes, after Matthew Cook flicked a nice ball into the path of Craig Pritchard, and he delivered a pinpoint cross into the path of the unmarked Andrew Swarbrick, who netted from close range.
Flint almost hit back on 8 minutes, when Stewart Carroll picked out Shaun Beck, and his fierce shot brought a good save from Hill-Dunt, but the rebound flew straight into the path of Brown, who snatched at his effort somewhat, and the ball flew against the crossbar rather than into the gaping net.
Mark Cadwallader beat the Denbigh offside trap shortly after, but again failed to beat the Denbigh keeper, as Hill-Dunt's outstretched leg denied him a goal.
On 18 minutes, a Flint corner was cleared to the edge of box, where the waiting Levi Mackin fizzed a shot in on goal that just went wide of the far post.
Then on the half hour mark, Beck unleashed another good effort, but Hill-Dunt was equal to it yet again, pulling off a quality save.
Flint's inability to find a way past the Denbigh custodian proved costly, as just a minute later, Aaron Hassall delivered an excellent ball into the box, that found its way to Bull just beyond the far post and he rifled it into the roof of the net to give the home side a two goal advantage.
Both of Denbigh's wingers, Hassall and Pritchard were causing Flint all sorts of problems when they attacked, and they were repeatedly being given too much time and space to deliver dangerous balls into the area.
The game was effectively sewn up on 38 minutes, when Bull received the ball in space on the edge of the box, and hit a low shot that beat Ben Jones in the Flint goal.
At the start of the second half, Flint tried their best to get a foothold in the game, and on 49 minutes, Carroll lifted the ball into the path of Smyth coming in from a position wide on the right, but he could only find the side netting with his effort.
The visitors did manage to get on the score sheet on 53 minutes, although initially it looked as though Hill-Dunt had thwarted them once more. Shaun Beck delivered a great header on goal, that the former Prestatyn keeper acrobatically kept out, and it looked as though the danger was over, as he had pushed the ball out wide, but Smyth retrieved it, and sent a low cross back across the face of the goal, that Brown converted from a few yards out.
But Denbigh still remained a threat in attack, and on 57 minutes, Ben Jones was called upon to make the save of the game, as he somehow kept out Swarbrick's blistering shot from the edge of the box.
Unfortunately, that was only to prove to be a temporary let off, as Bull received the ball some 25 yards out from goal, got away from his marker, and advanced into the box before producing a composed finish to seal his hat-trick.
Flint had a chance of a consolation goal on 83 minutes, when James Hooper slipped in Brown, whose shot beat Hill-Dunt but not the alert Ben Nash, who got back to clear off the line.
But ultimately, Flint just couldn't contain a resurgent Denbigh side who carried on their good form from their midweek win over Prestatyn into this game.