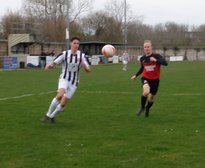 Despite a bright opening in which they opened the scoring, Flint were pegged back and then stifled by a determined Penrhyncoch side

In an attacking line up, designed to give more support to target man Andy Brown than of late, Flint started with James Hooper, Kyle Smyth and Shaun Beck and also gave young Academy talent Joe Palmer a starting berth in midfield.
With 2 minutes on the clock, a slick passing move instigated by Palmer saw Hooper get to the bye-line on the left and put in a dangerous cross, only for it to be cleared for a corner. Flint appeared to have a new sense of purpose about them following their defeats in the last couple of weeks, and were very much on the front foot, the only problem being that they were often guilty of over-hitting the final ball and so promising attacking moves were coming to nought.
On the half hour mark, though, they deservedly took the lead. Stewart Carroll sprayed a great cross field ball out onto the right wing where he found Smyth. Initially Smyth was held up by his marker, but he did well to retain possession, and eventually found Joe Culshaw who had overlapped him in support. Culshaw delivered a low cross across the face of goal, and Hooper was on hand to bundle the ball home.
Unfortunately for Flint their lead didn't last long, and three minutes later, in one of their rare forays into the opposition half, Penrhyn equalised.
Liam Jones received the ball wide on the right, and Johnny Hill looked to have the situation under control as he moved across to cover. But somehow, Jones managed to squeeze in an inch perfect cross in between Hill and the bye-line and deliver it right onto the head of Sion Meredith, who planted the ball firmly into the back of the net.
On 40 minutes, a Joe Palmer free kick was delivered to the back post, where John Davies had made a great run to, and his header was tipped over the bar by Leigh Jenkins in the Penrhyn goal. Incredibly, referee Liam Gray awarded a goal kick, just one of several bizarre decisions by the official who gave an erratic performance that bemused both sets of players, officials and supporters during the afternoon.
Into the second half, and Penrhyn had obviously decided to hold onto what they got, and set out with a very defensive formation designed to frustrate Flint and hopefully hit them on the break. The home side kept trying to play their way through the visitors' massed ranks and invariably were finding that their their passes were being intercepted as they were picked off. They should have been prepared to run more at the Penrhyn defence and commit their defenders, in order to open up some space, but were seemingly unable to do this for the majority of the half.
On 47 minutes, Flint cheaply lost possession, something they did on several occasions in the second period, and Penrhyn defender Matt Mousley picked it up and played a sublime ball with the outside of his foot down the length of the pitch to play in Jim Evans, who had a clear run in on goal. Fortunately for Flint, his shot was not the strongest and was comfortably saved by Ben Jones.
Following a free kick just before the hour mark, John Davies successfully won the first header, to guide the ball into the centre of a packed Penrhyn box, where a bout of pinball ensued, as Flint players kept having shots that were continually blocked, until eventually Smyth hit an effort that was goalward bound before Roosters' skipper Antonio Corbisero hacked it clear off the line.
On 70 minutes Penrhyn broke through Dafydd Carruthers, and Jones came racing out of his goal to try and clear the danger. However, as he reached the edge of his box, he realised he couldn't quite make it, but with the help of John Davies, managed to hold up Carruthers. Then as Jones retreated back into his 6 yard box, Carruthers got to the bye-line and crossed to Corbisero whose flicked header went wide of the Flint goal.
Almost immediately, Flint retaliated with a similar move of their own, as Smyth raced clear, and rounded the advancing Jenkins, but in the process was forced wide. His cross was delivered into the path of Beck and then Brown, but both miscued their efforts on goal.
Youngster Adam Edgar was introduced into the fray in the closing stages, and displayed some nice touches on the ball, none more so, than in the 84th minute, when a nice little dribble opened up some space, and he hit a shot from the edge of the area that just went wide of the post.
The final chance of the game fell to Flint, when from a corner, Brown hooked a shot in on goal, but once again that man Corbisero was on hand to clear off the line and secure a point for his side.
With the League Cup semi-final looking on Tuesday, Flint know that they will have to lift their performance several levels if they are to have a chance of beating newly crowned Cymru Alliance League champions, Prestatyn Town, for whom we offer our congratulations on their tremendous achievement.