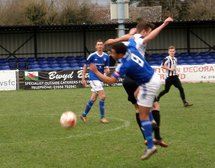 Bluebirds do the double over Flint

With no less than six changes to the starting line up, Flint were a pale shadow of the side that beat Prestatyn in their previous game

They managed no meaningful efforts on target in the first half and conceded two sloppy goals early in the match, as the decision to make so many changes backfired spectacularly.
Caersws went ahead with just two minutes on the clock, when a decent ball was crossed from the right to the far post. Ieuan Hewitt looked to have it covered, but facing his own goal he misjudged his header, which was presumably meant to direct the ball over the dead ball line, but instead it hit the post and then bounced off it into the path of Iwan Lewis who had a simple tap in.
The scoreline was doubled on 16 minutes following a corner which was only cleared to Josh Hartrick who hit a shot from 20 yards out that eluded Ben Jones and ended up in the Flint net. After his heroics on Tuesday night, Jones will no doubt be disappointed he didn't do better on this occasion, as the shot was hit in the middle of the goal, and went under his body, although he may have been partially unsighted as it came through a crowd of players.
Flint were playing like a team of complete strangers, but given the amount of changes, perhaps this wasn't too surprising, and they were virtually non-existent as an attacking force.
On 26 minutes, a good Caersws move ended with Shaun Evans hitting a rasping drive that struck the Flint post.
After the interval, Shaun Beck and Andy Brown were introduced from the bench, and almost immediately the Silkmen looked to have a bit of purpose about them, although it still took them until past the hour mark to trouble the Caersws goal.
Beck delivered a ball from wide on the right on 62 minutes, into the path of Kyle Smyth, but his effort finished the wrong side of the post from a Flint point of view.
The Bluebirds were content to sit back and soak up the Flint pressure, having established a healthy lead, and looked to hit the visitors on the break. Such a counter attack almost paid dividends on 65 minutes, as they broke on the Flint goal. Joe Culshaw was on hand to nullify the initial threat, but then the ball ran to Lewis, who was steaming in on goal and looked certain to score. Almost out of nowhere, Mark Cadwallader, who was filling in at centre half in place of the missing Matty Holt, did extremely well to hurl his body in the line of Lewis' shot and prevent what looked a certain goal. Indeed Cadwallader lead by example in the second half, breaking forward to set up attacks when he could, whilst defending solidly at the back. His defensive partner John Davies was called upon to come to the rescue on 67 minutes, making a great saving tackle on Shaun Evans who had broken clear for the home side.
Andy Brown got on the end of a James Hooper ball on 71 minutes, and produced a good flicked header, that Luke Evans pushed onto the bar. From the corner, the ball bounced into the path of John Davies, but his rising shot cleared the bar, from a good position.
On 78 minutes, Hooper put a delivery into Brown on the near post, and as he challenged for the ball the referee adjudged he had been fouled and awarded a penalty, which may have seemed a little harsh on the home side, but probably made amends for a blatant hand ball that they had escaped with earlier in the half. Cadwallader took responsibility, but in what summed up a miserable afternoon for Flint, he blazed the spot kick over the bar.
The home side almost had the last word with two minutes to go, when the dangerous Hartrick broke and cut into the box from the left. But Jones showed good anticipation and came out to meet him, and got in a good block as he looked to find his teammate Lewis who was set for another tap in if the ball had found him.
With just 1 point from our last 4 league games, our current fourth position in the table is now coming under threat, as our season threatens to peter out in a similar disappointing fashion to what it did 12 months ago.

Flint MOM - Mark Cadwallader (although he blotted his copybook with the penalty miss, he put in a composed performance in an unfamiliar centre back role)