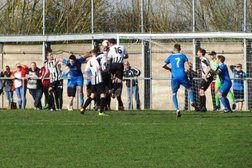 Displaying the tenacity that Champions are made of, Prestatyn came from two goals down to win the game.

However, they were helped in no small part by a couple of extremely contentious decisions by the officials, that left Flint feeling extremely hard done by.
The Silkmen stormed into a two goal lead inside the space of the opening 21 minutes. Richie Foulkes delightfully curled a free kick into the top left corner after 8 minutes to put Flint in the lead.
The visitors mounted a counter attack on the quarter hour mark, as Noah Edwards played the ball to Tom Kemp, but his low shot was brilliantly kept out by Ben Jones in the Flint goal. Then a few minutes later, Dave Hayes was gifted a free header from a James Stead corner, but his effort was wide of the mark.
Mark Cadwallader galloped through and beat the offside trap on 21 minutes, and was unerring with his shot, to put the hosts 2-0 up.
But the Seasiders pulled a goal back just 3 minutes later in somewhat controversial circumstances, following a melee in the Flint box. Jack Higgins ended up back heeling the ball into the net, but the linesman was clearly flagging for offside. The referee overruled his assistant and awarded the goal.
On 38 minutes, Kyle Smyth fed James Hooper, but from 8 yards out, his shot was well saved by Carl Jones in the Prestatyn goal.
Smyth broke through just before the break, but was under pressure as he got his shot away from 16 yards out, and his attempt went over the bar.
This was quite a different first half performance compared to their dismal showing at Caersws last week, and Flint were well worth their one goal lead at the break.
The Silkmen kept up the pressure at the start of the second half, and on 54 minutes, Smyth fed Foulkes on the edge of the box, and his quick shot forced another good save from Jones. Then came what was to be the defining moment of the game. In the 58th minute, Hooper beat his man and was through on goal. As Jones came out to meet him, he chipped the ball over the keeper, and as he looked to round him he was felled by what looked to be a punch to the head. With the home side clearly expecting the Prestatyn keeper to see red, they were incredulous when Hooper was booked for diving, after the referee had consulted with the linesman. This was to prove a crucial turning point in the game, as after this incident, Flint seemed to lose their momentum, and Prestatyn come to the fore.
Just 3 minutes later, they were back on terms, when Ben Maher toe poked home from inside a crowded Flint box.
Then on 69 minutes, a low cross caught the Flint defence unawares, and Higgins was on hand to side footed a simple effort into the net.
Higgins put another effort onto the post on 76 minutes as the Champions were now in control of the game, and Jack Lewis was unable to make the most of the rebound as he sent it across the goal.
Flint almost salvaged a point in the dying minutes, when Joe Palmer shot through a crowded box, but once again Jones was on hand to thwart the effort.
Although the Flint players can be pleased with the level of performance they brought to the majority of the game, defeat now means it's just one point from the last five matches in the league, as we are still just about clinging onto fourth spot, although Porthmadog are just three points behind with a game in hand.