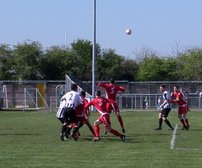 Gresford came into the game looking for the one point that would guarantee them a third placed finish in the league and ended up claiming all three.

Despite enjoying some healthy possession, and bossing large periods of the game, Flint were once again shot-shy in front of goal, and were made to pay as the visitors took full advantage of their limited chances.
The first half had a definite end of season affair feel to it, as both sides laboured in the glorious sunny weather and failed to trouble the opposition's keeper. Flint constructed some decent passing moves in the middle of the park, with Joe Palmer at the heart of most of them, but couldn't break down a rugged Gresford defence, commanded by Max Peate and Jack Jones.
A Palmer corner on 40 minutes lead to the first real chance of the game, as the ball was flicked into the path of Richie Foulkes some 15 yards out, who put in a good header that was cleared off the line.
Four minuted into the second half, and James Hooper was unceremoniously blocked 22 yards out, when he was set for a run at the visitors' defence. From the resulting free kick, wide on the left, Foulkes skimmed the cross bar with his shot.
Gresford seemed content to sit back and claim the point they required, as Flint struggled to penetrate their rearguard and force their keeper Mike Platt into making any meaningful saves.
They did spring a counter attack on 53 minutes, however, when a Flint attack broke down, and a quick ball was played into the path of Tom Freeman, who galloped into the Flint area and bore down on goal. With Chris Li straining every sinew in an effort to catch up with him, Freeman appeared to panic under the pressure, and screwed his shot well wide when handily placed.
A bout of Flint pressure on the hour mark almost paid dividends. First of all, Platt got in a good punch to clear the danger, but the ball was then swung into the box again, and this time Platt was less successful with his punch, as it fell to Hooper who was around 12 yards out central to the goal. However, as the ball bounced up, he failed to get over it sufficiently, and he ended up hitting a rising shot over the bar.
That miss was to prove costly, as Gresford took the lead a couple of minutes later. Having been awarded a slightly fortuitous free kick some 35 yards out, they took full advantage, when Freeman's low ball was diverted goalwards by Tom Wells and ended up in the corner of Ben Jones' net.
On 67 minutes, Flint's task got even steeper, when they conceded a second. Mark Cadwallader was guilty of not clearing his lines in the left corner, and allowed Owen Roberts to rob him of the ball. As Cadwallader tried to make amends and win the ball back, he only succeeded in bringing down Roberts in the box, and Jack Chaloner slotted home the resulting penalty.
Having gone two goals down, Flint suddenly found a bit more purpose to their game, and looked much more threatening. They pulled a goal back on 73 minutes, following good link up play between Shaun Beck and Foulkes. Having fed Foulkes, Beck moved into space 20 yards out in the middle of the goal, and took the return ball in his stride to hit a confident shot that went in off the post to register his first goal for the club since his return.
Luke Tyson was introduced off the bench as Flint tried to salvage something out of the game, and produced some mazy runs at the Gresford defence that had hitherto been sadly lacking. On one such run on 83 minutes he set up Hooper who hit a snapshot from a wide angle on the left, 16 yards out, that went just wide of the post.
And so the Silkmen signed off their home league campaign in somewhat disappointing fashion with a defeat. With Caernarfon winning their League Cup semi-final, we now know that our final two games of the season will see us face the Canaries twice, firstly at the Oval next weekend in a league encounter, before meeting them again at Conwy on April 29th in the League Cup final.