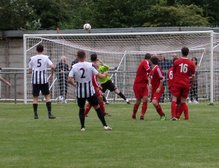 Holden's Flint off to a winning start

Andy Holden's first competitive game in charge resulted in a win for his side, but the victory was marred by a serious looking injury to Ieuan Hewitt.

The injury to Hewitt occurred in the 85th minute, just after he had struck what proved to be the winning goal from a free kick. He went up to challenge for the ball with Ruthin's Jordan MacCarter, and as both players landed on the ground, Hewitt sustained a neck injury, that caused the game to be delayed by 30 minutes whilst paramedics were called and treated the player as he lay prone on the ground. He was then taken by ambulance to hospital, and all at the club wish him all the very best in his recovery, and hope that the injury does not turn out to be as serious as first feared.
Unfortunately it was a game marred by injuries, as both Ruthin's Adam Davies and Flint's Jack Pickering had to depart the action early in the game, having sustained heavy injuries, the latter with a nasty looking knee problem.
Flint got off to a lightening start, scoring the first goal after just 2 minutes. Hewitt was pivotal in the move, winning a crunching tackle in his own half before setting up an attacking move , finding James Hooper, who carried the ball forward into space, before crossing it across the face of goal, where a Ruthin defender turned it into his own net under pressure from Andy Brown.
Flint looked to have doubled their advantage on 8 minutes, when following a corner, Joel Haack had a header on target, which was cleared off the line.
Despite the promptings of Phil Doran and Joe Palmer down the left hand side, Flint were unable to muster any real efforts on the Ruthin goal for the next half an hour or so. Then on 38 minutes, a good attacking move almost paid dividends, as Brown laid the ball back to Palmer and he steered his shot just the wrong side of the post from the edge of the area.
Just before half time, Hooper was sent clear, but Ruthin keeper Ryan Goldstone did well to come out and narrow the angle and get an all important touch to deflect the ball out for a corner.
Two minutes into the second half, the industrious Doran went on a mazy run, before laying the ball off into the path of Richie Foulkes just inside the area, but some last ditch defending meant his shot was deflected just wide of the target. On 55 minutes, Kyle Smyth did well to win possession back for his side, and played in Hooper, but his rising shot went ust over the bar.
By this stage, Flint were turning in a workmanlike performance, rather than seriously turning the screw on their opponents, and as Ruthin were finding themselves with more possession of the ball, there was always the possibility they may find a way back into the game. And so it proved, about midway through the second half. Some casual defending, had led to a Ruthin throw, in the attacking third on the right. From the throw in, the ball was not cleared, and it ended upat the feet of MacCarter in the centre of the goal from 12 yards out, who buried the opportunity.
To their credit, Flint did manage to shake themselves out of their lethargy, and when Palmer was fouled just outside of the box on 85 minutes, Hewitt took full advantage, blasting the free kick into the roof of the net. Just after the restart, however, he was to suffer his injury.
When the game eventually got going again, Flint were forced to play out the remaining 5 minutes or so with 10 men, having used all their substitutes. A somewhat panicky end to the game ensued, when instead of just closing up with two solid banks of four, players appeared to lack the required discipline. But nevertheless, they held on for the all important 3 points.

Flint MOM - Phil Doran (just shaded it ahead of Joe Palmer . Both players carried the most threat going forward for Flint, but Doran put in some good runs from deep)