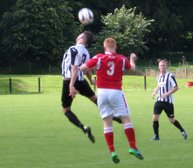 After the initial opening onslaught from the home side, Flint gradually took control of the game and ran out comfortable winners against a visibly tiring Queens Park

The hosts had the first sight of goal when Corey Smart fired a 22 yard free kick just wide of the post after 6 minutes. Then, on 21 minutes, Flint were guilty of losing possession cheaply on the left hand side, setting up a Queens Park attack. Phil Doran had a couple of bites of tackling his opponent as he ran at him in the area, and the second was to prove costly as he lunged in at the corner of the box on the bye-line and conceded a penalty. Mike Latham dispatching the spot kick with ease.
From that point on, it was pretty much one way traffic as Flint took control, dominating possession, and carving out a series of chances, some of which were taken, others of which were either spurned or denied through good goalkeeping by Callum Thurnham.
The equaliser arrived in the 36th minute, when Ieuan Hewitt delivered a corner to the far post, and captain Stefan Halewood stooped in to head home.
A couple of minutes later, another Hewitt cross found an unmarked Richie Foulkes, whose header hit the bar and bounced over. At this stage, Flint were seemingly able to attack at will, with Shaun Beck proving to be the ideal spearhead, holding the ball up for his side and bringing other players into the game.
Following a free kick in the 41st minute, the ball was initially cleared to the edge of box, before being played back into the danger area, whereupon Nicky Chesters blocked an effort with his arm, resulting in a second penalty award of the game. Foulkes converted the spot kick, as the power of his shot beat Thurnham, despite the keeper guessing the right way.
The game could, and probably should, have been wrapped up by half time, when a glorious opportunity went begging in the 43rd minute. Hewitt broke down the right, and delivered an inch perfect ball to Mark Cadwallader, who found himself on his own with just Thurnham to beat, but he hit an air shot, and the ball bounced harmlessly past him.
Flint had a slight scare at the beginning of the second half, as Edgar Lima broke through the centre, and a mix up between Joel Haack and keeper Nik Bulmer, as they both tried to cover the danger, resulted in the ball running into the path of Sean Skimmings, but he dragged his shot wide from the edge of the area.
From then on, it was very much a continuation of what had become the norm towards the end of the first half, with Flint in search of that elusive killer third goal. They thought they had it on 51 minutes, when Haack used his strength to outjump Thurnham and bury a header into the net, only for the referee to rule that he had unfairly barged the Queens Park keeper in the process, and disallowed the effort.
Hewitt put in another quality cross a couple of minutes later, and Thurnham had to be at his best to save Cadwallader's header.
Luke Tyson was now beginning to get on the ball much more for Flint, and his pace and nippiness was proving to be a real headache for the rapidly tiring Queens Park backline. Also, Doran was raiding down the left flank much more prominently than in the first half, again causing plenty of problems for the beleagured Park defence.
Just over the hour mark, Doran and Beck linked up to great effect, with the full back receiving the ball back from the striker, and pushing on towards the bye-line, where he successfully rode a challenge, and put in an excellent delivery to Tyson. Thurnham pulled of an excellent save from Tyson's close range effort, but the ball rebounded out into the path of Foulkes who drilled home his second of the afternoon.
Kyle Smyth decided to get in on the action in the 76th minute with a fine solo effort. He won possession back with a good tackle in the centre of midfield, then ran at the heart of the Queens Park defence, skipping past Danny Myers on the edge of the area before shooting low past Thurnham to put his side 4-1 up.
Park were denied a consolation with just under 5 minutes left, when, from a free kick, substitute Charlie Jones saw his close range header come back off the crossbar.
In the closing stages, Flint had another good couple of chances. First, James Hooper hit a curling effort that Thurnham did well to tip over, then from the resulting corner, Tyson was denied the goal his performance probably deserved, when he headed inches wide.