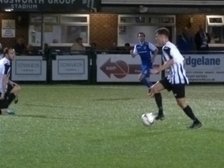 Fosu-Mensah at the double for Airbus

Some clinical finishing by Airbus' in-form Dutch striker Alfons Fosu-Mensah proved to be the deciding factor in this Flintshire derby.

Flint started on the front foot and carved out some good chances in the opening 20 minutes. First, Ieuan Hewitt hit fly with a couple of long range efforts that just cleared the bar. Then, from a corner, Joel Haack connected with a good header, but saw his effort cleared off the line by Ryan Edwards.
Kyle Smyth saw an effort hit the side netting on 18 minutes, as he tired to curl his shot around the keeper from a wide angle.
Airbus served notice of their goal threat when Steve Tomassen's header rattled the Flint crossbar, and just after the half hour match took the lead with a quality strike. Fosu-Mensah curled a lovely shot into the top corner from the edge of the box, as the Flint defence stood off him.
The Silkmen went close to an equaliser on 40 minutes, when Alan Bull got free down the right, and delivered a perfect cross to Andy Brown, whose header from 6 yards out was extremely well saved by Airbus custodian Andy Coughlin.
Bull had a good chance for Flint early in the second half, when he was found by Hewitt, but from 8 yards out he shot straight at a grateful Coughlin.
Another good opportunity to draw level went begging on 64 minutes, when Haack, James Hooper and Kyle Smyth were all involved in trying to grab the elusive goal. Hooper's effort was well blocked by Coughlin, and the rebound ran to Smyth whose low shot beat the keeper but struck the post.
Flint's keeper, Nik Bulmer, was called into action on 77 minutes to deny Fosu-Mensah, as he dived low to produce a good save from the Airbus forward's headed effort.
The scoreline took on a somewhat flattering note for the hosts as the game entered stoppage time, with Fosu-Mensah getting on the end of a long ball played upfield, holding off the challenge of Hewitt, and hitting a 20 yard effort that beat Bulmer in the Flint goal.
Although Flint suffered their second 2-0 defeat in the space of 4 days, there were plenty of positives to take from this display, and they carved out several good chances from open play, something which they had struggled to do in their previous two games.