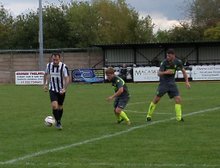 In contrast to their previous couple of games, where they had plenty of possession but no goals to show for it, this time Flint ruthlessly exploited their chances

The home side started the brighter, and with five minutes on the clock, a good ball from Phil Doran found Andy Brown in space inside the 18 yard area. As he turned to get his shot away, a great saving tackle by Andy Ford came in to deny him what would have been a glorious opportunity to open the scoring.
The visitors then started to settle into their rhythym , and on 9 minutes were awarded a free kick right on the angle of the box. Jack Richards hit a curling effort that seemed destined for the top corner, until Nik Lee-Bulmer sprang across his goal and tipped the ball over. Guilsfield started to assert themselves on the game, and posed a threat down the right hand side through Jake Cook, whose trickery was causing Phil Doran a few problems as he struggled to contain him.
Just before the half hour mark, long throw specialist Chris Cathrall delivered a perfectly flighted throw that caused consternation in the Flint defence, and Asa Hamilton pounced on the loose ball to strike a powerful shot, but Bulmer was equal to it as he flung himself to his right and was able to parry the effort.
Flint then had a sight of goal, when Ieuan Hewitt hit a 30 yard effort, that took a deflecton, which sent the shot just the wrong side of the post.
The Silkmen then struck on 35 minutes, somewhat against the run of play, up to that point. A ball was played into the outside left channel to find Alan Bull, who took it towards the bye line, then did tremendously well to hold it up and wait for the arrival of support, before calmly pulling it back to the incoming Richie Foulkes, who from 15 yards out in the centre of the goal, struck a blistering effort that gave Guils' keeper Andy Wyncherley no chance as it powered into the back of the net.
Shortly after, Flint doubled their advantage. This time it came from a break down the right, with Kyle Smyth sending a ball across the face of the goal, and Andy Brown showing great anticipation to meet it at the near post and force it over the line.
Just before the interval, Jack Richards hit a long range effort, that forced Bulmer into making a good save, but the rebound fell into the path of Hamilton, whose follow up effort struck the angle of crossbar and post.
The expected onslaught from the visitors at the start of the second half, failed to materialise, and the Flint back line, expertly marshalled by Carl Rodgers and Stefan Halewood remained relatively untroubled, as they confidently dealt with everything that was thrown at them, and generally protected Bulmer's goal quite effectively. Indeed, for the first 20 minutes or so of the second half, the game became remarkably scrappy, and Flint were their own worst enemies in terms of giving possession away too cheaply, rather than being put under any undue pressure from the opposition. The one notable exception was Alan Bull, who, everytime he got on the ball, held it up well for his side and tended to find a team-mate with a pass, rather than give the ball away unnecessarily.
The game could have been killed off after 54 minutes, when from a Joe Palmer corner, Brown came running in to meet the ball, and got a glancing header which went narrowly past the post.
A minute later, Cook made a good run down the right for Guilsfield, and delivered a teasing ball into the box that caused a brief moment of panic, as it bounced around dangerously, before being hacked clear to safety.
The killer third goal arrived on 79 minutes, following a long clearance from Bulmer which went into the path of substitute James Hooper, who ran clear of the Guilsfield defence and calmly slotted the ball past Wycherley, to well and truly put the game beyond the reach of the visitors.
This capped a great result against a side who, at the start of play, were third in the table. Now we must look to build on this over the coming weeks to put a decent run together that will see us climb the table.

Flint MOM - Carl Rodgers (formed a solid partnership with Stef Halewood, and made countless defensive interceptions to protect his goal)