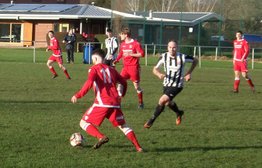 Niall McGuinness's game first game in charge didn't quite turn out as he would have wished, as Flint continued their losing streak.

A pedestrian, one paced opening half an hour or so by the visitors proved costly, as by then they were two goals down to a well organised, hard working Gresford side, and it was always going to be a tough ask to then get anything from the game. Once again, Chris Budrys too often cut a lonely figure up front, as midfield support runners were in short supply, and on the occasions they did penetrate the final third, the lack of anticipation shown meant the Gresford defence had a relatively easy task in clearing their lines.
Flint were on the back foot from the second minute, when Athletic went ahead from a free kick. Peate got the end of the ball as it was played into the box, and his effort was initially blocked, but then Flint defence were slow to react, and Jack Jones crashed home the loose ball from 8 yards.
The home side doubled their lead on 22 minutes. This time the Flint defence were caught square and flat footed, as Obi Onoura ran onto a long ball played over the top. Goalkeeper Nik Lee-Bulmer did well initially to deny Onoura as he ran through one on one, but his efforts were in vain, as the Gresford striker latched onto the rebound and drilled it into the net.
It was not until the 38th minute that Flint were able to muster their first effort on target. Richie Foulkes broke through the middle, and got a shot away that was pushed out for a corner by Gresford custodian Mike Platt. Five minutes later, Foulkes again went close with a long rage effort, that just went the wrong side of the post.
The Gresford midfield, orchestrated by Jack Challoner and Dave McIntrye were especially dominant in the first half, snapping into tackles and winning possession, and harrying their Flint counterparts into making mistakes, so much so that the Silkmen couldn't get any type of rhythm going to their game.
Whilst the second period saw Flint have more of the ball, too often poor decision making in the final third meant that nothing came of it.
Just when it looked like they would never score, a brief glimmer of light for Flint appeared as the game entered the final 10 minutes. In what was an all too rare case of moving the ball quickly, from a throw in on the left, the ball was instantly switched across the width of the pitch into the path of Ieuan Hewitt in space on the right. He took a couple of touches before unleashing one of his trademark thunderbolts from fully 30 yards that sailed into the net beyond Platt. But Flint were unable to build on this in the remainder of the game, and so were once again consigned to lose by the odd goal.
If we are to progress up the table, we have to show we can be prepared to win ugly in these type of games, but, unfortunately, that seems to be a trait we lack at the moment.