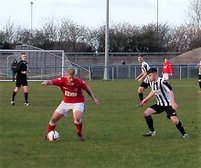 Flint made an encouraging start to 2018 with a comfortable 4-0 win over Queens Park, who gamely kept battling on until the end.

This was Niall McGuinness' first league victory since taking over as manager, and he introduced 2 new signings into the starting line up, Jack Lewis and Jacob Lever, whilst a third, Jack Stewart was introduced from the bench in the second half. All three debutants acquitted themselves well, with composed and measured performances that hopefully bodes well for the future. But it was Luke Tyson who stole the show, putting in a typically tireless performance, alongside midfield teammate Joe Palmer, in what was to be a fitting final appearance for Flint before he departs for Australia next week.
Flint started the game at a high tempo, with Palmer and Tyson making nuisances of themselves in midfield, with energetic displays, closing down their opposite numbers and not letting them settle on the ball. This put the visitors on the back foot, and they were struggling to clear their lines, as Flint piled on the pressure.
However, the home side were unable to convert this pressure into any decent goalscoring chances in the opening quarter of an hour, as they were guilty of over elaborating or over hitting the final ball. Then, as 15 minutes ticked by, Queens Park put together a good little move which led to them quickly breaking down the right and coming close to opening the scoring. Levi Roberts took the ball in his stride and advanced into the Flint area with purpose, before unleashing a shot that struck the crossbar.
Stung by that let off, Flint hit back through that man Tyson, who shot from just outside the box, and his well judged effort cruelly came back off the post.
The home side took the lead on 28 minutes following a long throw into the box by Lewis. Tyson got the slightest of flicks on the ball that propelled it towards the back post, and into the path of Carl Rodgers, who blasted home from a couple of yards out.
Just after the half hour mark, Alan Bull tried his luck from 22 yards out, and his shot took a deflection which sent it thudding against the bar. Shortly after, Bull came close again, when having jinked his way into the box, he shot from a wide angle on the left, but Queens Park keeper Richard Cowderoy made himself big, and got a good block on the ball to deny the Flint striker what had seemed a certain goal.
So, despite the home side's dominance, it was still only a slender 1-0 advantage at the interval.
The vital second goal arrived on 53 minutes. Bull was the catalyst, as he once again ran at the visitors defence, before hitting a shot that was well blocked. But the rebound went into the path of Tyson who was following up, and he calmly steered the ball into the corner of the net from the edge of the box.
Then, on the hour mark, the game was made well and truly safe when Flint struck their third. Rob Jones hit a 25 yard shot that once again took a deflection en route to goal. But unlike the first half effort from Bull, this time it sent the ball arrowing into the top corner of the net and out of Cowderoy's reach.
Bull was denied again on 72 minutes, when Cowderoy pulled off another fine save. Then from the corner, Richie Foulkes rose highest and got a good connection on the ball that sent it over Cowderoy, but saw his effort cleared off the line by a covering defender.
The scoring was completed in the 81st minute, following good work by substitute Stewart, who played in Chris Budrys. He ran into the box and as Cowderoy came out to meet him, he produced a cross cum shot from a wide angle that Bull got on the end of, to finally get the goal his persistence deserved.
Budrys showed a great touch on 90 minutes as he controlled a ball played up to him and laid it off to Stewart who thumped a good shot that struck the Queens Park woodwork for the third time of the afternoon.
So, after the disappointment of the Boxing Day derby, this was an encouraging display and a good response from Flint, but it was against the next to bottom side, and there will be stronger challenges to come over the next few weeks. But if we can use this as a platform and the new faces in the squad continue to gel and can build upon their promising initial displays, then we should start making ground on the teams above us in the table.