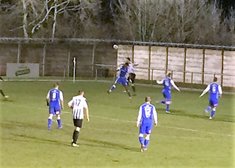 Flint are grounded by Airbus

Flint's wretched home form continued as they slumped to a 3-0 defeat by Airbus, who kept their faint title hopes alive with this win.

Flint paid the price for a terrible 10 minute spell in the first half, which left them trailing 2-0 at the break. Then, having a man sent off early in the second half, meant there was no real way back into the match for the home side, and the Wingmakers added a third with just over half an hour remaining to underline their superiority on the night.
For large periods of the first half, Flint more than matched their opponents, and the Silkmen carved out the first real chance of the game on 9 minutes. Carl Rodgers picked up a loose ball midway in the Airbus half, and run at the defence, before unleashing a fierce shot that just cleared the bar.
Then on 13 minutes, a Joe Palmer free kick was headed narrowly over by Stefan Halewood. A few minutes later, Airbus posed their first real threat, when Danny Taylor broke down the right and fed Alfons Fosu-Mensah, whose neat side step earned him the space to get a shot away, but it was a somewhat erratic effort from the edge of the box.
Midway through the half, the energetic Kyle Smyth forced a good save out of Airbus keeper Dave Roberts after cutting in from a wide right position.
On the half hour mark, it was Nathan Quirk who went close for the visitors, curling an effort just wide of the Flint goal.
Then came the calamitous spell during which Flint switched off defensively, and paid the price. On 32 minutes, Kristian Platt headed home all too easily from a corner, from 6 yards out to put the Wingmaker 1-0 up. Four minutes later they doubled their score, thanks to some shoddy defending. Nik Lee- Bulmer initially saved a shot from Lewis Buckley, and the loose ball should have been safely cleared by one of his defenders, but instead it struck Rodgers in the head, and Buckley was on hand to pounce and force the ball home for an easy goal.
Any hopes Flint had of getting back into the game were effectively extinguished on 50 minutes, when, following a clumsy challenge, Halewood was shown his second yellow card of the night, and the home side were reduced to 10 men.
Then, on 58 minutes, the third goal of the evening was shipped by the home defence, as Fosu-mensah was afforded too much time to pick his spot.
Flint had a couple of chances for a consolation goal. First, when Andy Brown closed down the keeper, and the ball rebounded off him, but went inches wide of the post. Then, from a Jack Lewis corner, a Chris Budrys header forced Roberts into a fingertip save to push the ball over the bar.
Flint enjoyed some decent spells of possession on the night, but defensive lapses and lack of penetration up front, meant it was a sixth home league defeat of the season for the Silkmen.