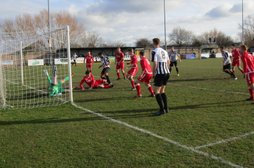 Having dominated the game for the first 45 minutes, Flint had only the one goal to show for their superiority at half time.

That allowed Gresford to make a spirited response in the second half and they ultimately deserved their share of the spoils, although they were indebted to their goalkeeper Mike Platt in securing their point.
Platt was first called into action on 11 minutes. Flint mounted a good move down the right, after Ieuan Hewitt had found Jack Stewart. He, in turn, played the ball into Shaun Beck, who turned and hit a smart shot that Platt blocked.
On 15 minutes, Hewitt hit a low raking ball into the edge of the 18 yard box. As the ball bounced up from the turf, a Gresford defender impeded its progress with his arm, conceding a penalty. Richie Foulkes stepped up, and confidently slotted the ball home to put his side 1-0 up.
The Flint midfield were combining extremely well, and their slick passing moves were at times a joy to watch, and a breath of fresh air from some of the more turgid performances that have been previously witnessed in games. Jack Stewart, in particular, was impressing with his incisive running, although his final ball at times could have been better, as Flint looked to bag that all important second goal.
Kyle Smyth, who was operating in a more forward role, went close on 20 minutes, as he hit an effort that was well blocked by Nathan Williams, who threw his body on the line for his team. Just after the half hour mark, Joe Palmer picked up possession in a central position, and let fly with a 22 yarder that looked destined for the top corner, until that man Platt got across to tip it over the bar.
Shortly after, a ball over the top found Smyth, who tried to break clear, but was forced wide. He was then only able to send the ball across the 6 yard box, but delivered a great ball, and the incoming Mark Cadwallader was only inches away from applying a decisive finish.
Then, just before the break, Foulkes found himself in a great position to make it 2-0, but could only watch in disbelief as Platt spread himself to somehow deflect his shot up, over the bar. That was a vital save to keep his side in touch at the interval, and was surely pivotal in what was to transpire in the second half.
For the second half, Gresford were a side transformed, and they soon had Flint on the back foot. On 47 minutes, Owen Roberts ran through a gap in the Flint defence, and found himself one on one with Nik Lee-Bulmer, just inside the box. As both players stretched for the ball, the Flint keeper clattered into the Gresford forward, and to the home side's relief and the visitor's dismay, the referee deemed no foul was committed, and awarded a goal kick, as Roberts lay prone on the ground.
On 55 minutes, Gresford's chief playmaker, Simon Smith sprayed a good ball out wide to the left. The ball was crossed in and initially headed clear, only for Jack Chaloner to return it with interest, as he struck a sweet 25 yard effort that sailed into the top corner, giving Bulmer no chance.
Flint then tried to reassert themselves on the game, and Jack Lewis raided down the left and broke into the area to good effect, The ball was eventually cleared out for a throw, but that was the prelude to Flint's second goal. From the throw on the Flint right, the ball was flicked on by Foulkes, and eluded several players, until Shaun Beck was on hand to bundle it over the line at the far post.
But Gresford refused to lie down, and struck back on 70 minutes. Mike Latham was given too much space in a central position about 20 yards out, and he played it out to the left wing to Tom Freeman, who instantly attacked the Flint back line. He got to the bye-line, and sent the ball across the face of goal for substitute Aaron Edwards to poke home from close range.
A minute late, the visitors almost took the lead, when danger man Freeman cut in from the left and hit a rising shot that Bulmer got his fingertips to, to divert it to safety.
It was now end to end stuff, with both sides trying to claim the third goal. A goalmouth scramble ensued on 75 minutes, but Flint skipper Carl Rodgers was unable to apply the decisive touch to get the ball over the line. Then, on 84 minutes, Stewart cleverly bought himself some space, before hitting a 20 yard strike that had Flint supporters cheering, until Platt somehow sprung low to his right and clawed the ball away.
Flint will be left feeling disappointed that they hadn't put the game to bed in the opening 45 minutes, having exerted a lot of pressure, and forced a succession of corners, but Gresford must be given credit for the way in which they forced their way back into the game in the second half. The old adage of what happens when you don't take your chances was proved once again, although an inspired performance by keeper Platt also had a lot to do with that.

Flint MOM - Jack Stewart (made an impressive return to the 1st team after an injury lay-off, and was a catalyst to a strong first half team performance)