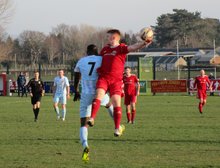 The old footballing cliche of a game of two halves was surely never more aptly applied than to this game.

Having been completely outplayed for the first 45 minutes, Flint staged a remarkable recovery to dominate the game after the interval, and go on to win the game with two well taken goals.
The hosts started the game on the front foot, and put the Flint defence under severe pressure, with the dangerous Craig Pritchard being afforded way too much space, whether it be down the right flank or when he cut in to the midfield area. He served a warning on 9 minutes, when having received the ball all too easily from a short corner, he strode into the area without being closed down, and hit a shot that Nik Lee-Bulmer managed to beat out. However, the ball rebounded back from a Flint defender, and was dangerously close to bouncing back over the goal-line, until Bulmer just managed to collect it in the nick of time.
Then, a minute later, in an all too rare foray into the opposition half, Flint went close, when Andy Brown did well to win possession. He charged forward into the centre of the pitch, and found enough space to get away a shot, unleashing a 25 yarder that flashed just wide of the post.
But Denbigh were still the far more potent looking outfit, and Flint were still failing to get close to Pritchard, and they paid the price on 22 minutes, when he was pivotal in the move that led to the opening goal. Denbigh attacked down their right, and put together a couple of nice give and goes, with Pritchard at the centre of it. He got himself into the Flint box, and received the pass back, and then managed to slip it into the path of the unmarked Josh Davies, who probably couldn't believe his luck at the space he was afforded, and he calmly steered the ball into the Flint net.
For the remainder of the half, it looked as if it would be a case of how many Denbigh would add to their tally, as Flint were guilty of inviting pressure back onto themselves with extremely poor distribution, and could scarcely string two passes together. It was fortunate that the home side were unable to convert their possession into goals as a combination of poor finishing and poor decision making in the final third, meant that they were unable to add to their solitary goal. Meanwhile, Alan Bull was ploughing a lone furrow up front for Flint, and was doing his best to chase down lost causes but was offered next to no support from his midfield colleagues, with only Brown enjoying any success in trying to get Flint moving forward.
So, at the break, it was with a sense of relief that the score remained only 1-0 to the hosts.
Something akin to the riot act was presumably read to the Flint players at half time, as in the second period they were a side transformed. They came out and took the game to their opponents displaying levels of vigour and gusto, that had been sadly lacking in the first half. It was now Denbigh who were having trouble getting out from their own half, and who were all too often gifting the ball back to the other side.
The equaliser arrived on 63 minutes, following a bout of Flint pressure, which was initially cleared, but Bulmer played the ball back onto the right flank, to set up the move that led to the goal. The ball was worked to the edge of the Denbigh box, to the waiting Richie Foulkes. He did well to work the ball into some space and sorted his feet out to unleash a shot into the top corner of the net.
Flint put together a sweeping move on 77 minutes that almost paid off. Ieuan Hewitt fed Kyle Smyth, who outpaced a defender and was running in on goal. Just as he was about to pull the trigger, a great last ditch tackle denied him the opportunity, but the ball ran into the path of Shaun Beck, who turned and hit it but dragged his shot wide of the target.
That was only to prove to be a temporary reprieve for Denbigh, as three minutes later, Jack Lewis delivered a perfectly weighted cross from the left, and onto the head of Beck, who showed that he's lost none of his striker's instincts as he produced a deft little flicked header to send the ball into the goal.
As the game moved into added time, the home side tried to rally and salvage something from the game. They spurned a glorious opportunity on 92 minutes, when a Joe Culshaw free kick was delivered into the Flint box, and substitute Warren Duckett was not picked up and had a free header from 6 yards out. However, he could only direct it over the Flint bar, much to the relief of the Flint defence.