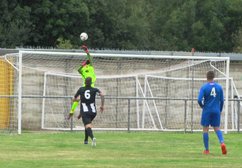 Flint kicked off their season in style by scoring five of the seven goals in an entertaining curtain raiser at Cae Castell.

A blustery wind made conditions tricky, and the Silkmen started the game with it at their backs, and sought to take full advantage in the opening 45 minutes. They profited from an early goal, thanks to their pressing of the Hotspur back line. Good closing down by Kai Wallis forced the ball back to young Daniel Williams, who was making his senior debut in goal for the visitors. As he attempted to find his right back, Wallis followed up, blocked the attempted pass, and the ball ricocheted into the net.
It was to prove to be something of a baptism of fire for Williams in the opening period, as his confidence clearly suffered from that early incident, but to his credit he came into his own later in the game and pulled off some good saves to keep his side in contention.
On 8 minutes, Ryan Smith tried hi luck for the Silkmen from 18 yards out, and Williams just about managed to scramble the ball out of play, after something of a fumble. After 20 minutes, Andy Brown set off on a rampaging run that took him to the edge of the area, when he was finally closed down. The ball broke to Smith, but from a good position his shot was rather tame, and Williams collected comfortably.
Hotsput got their first sight of the Flint goal on 23 minutes. Their new signing Harry Galeotti broke down the right, and delivered an excellent cross onto the head of John Littlemore. The ex-Bangor player thought he had scored but Josh Hart in the flint goal had other ideas, and acrobatically tipped the ball over the bar.
Just before the half hour mark, Flint notched their second, following a free kick that had been awarded about 15 yards inside the Hotspur half. Sam Hart delivered a good ball into the danger area and Mark Cadwallader applied the finish with a deft flick header into the back of the net.
A comfortable half for the home side saw them hold a two goal advantage, but the question was would it be enough, as the visitors now enjoyed the benefit of the wind. As expected Hotspur came out for the second half with a determination to force their way back into the game. Flint withstood a period of early pressure, with Sam Hart marshalling his players to good effect.
On 55 minutes, Littlemore made a good run, and fed fellow forward Chris Jones, who found space to hit a fierce shot that Hart did well to stop at his near post. Almost immediately, Flint broke up the field with a sweeping move, and Luke Blondel released Kyle Smyth, who in turn found Cadwallader, who was racing up in support. Initially, it looked as though Cadwallader's progress was halted by the retreating Hotspur backline, but he showed great perseverance to retain possession, make space for himself and drill a good shot from the edge of the area across Williams and into the net.
Hotspur showed they weren't finished and hit back on the hour mark. A free kick was played deep into the Flint box, and Alex Jones showed the greater determination to get on the end of it, and force it home.
The game was now resembling something of a boxing match, with punch and counter punch being landed, and sure enough Flint hit back just a few minutes later to reassert their authority, through another set piece. Hart took the free kick from near the corner flag on the right. Brown met the cross with a bullet header that gave Williams no chance, to put his side 4-1 up.
Just as the Silkmen though it was job done, back came Hotspur once again. Kenleigh Owen delivered a wicked free kick from the right, and Chris Jones applied a glancing header to pull another goal back.
On 77 minutes, Hart struck a free kick from a central position 22 yards out, that was heading for the top corner. Williams distinguished himself by leaping across his goal, and getting fingertips to it, to push it over the bar.
Flint were now finishing the game stronger, and determined not to let the Harbourmen back in. The introduction of Jake Hampson from the bench injected some decent pace, and he was soon testing the visitors' defence. On 79 minutes, he received the ball wide on the left, cut in and unleashed a shot that went into the side netting. A few minutes later, he got on the end of a decent Rob Jones cross, but Williams turned his header around the post.
Mamudo Dabo made an immediate impact after being introduced as a late substitute. With his first touch, he received the ball, charged towards goal, and as Williams came out to narrow the angle, he showed great presence of mind to square the ball to Hampson, who accepted the gilt edged opportunity to notch his first goal for Flint, and complete the Silkmen's scoring for the afternoon.

Flint MOM - Sam Hart (The Flint skipper led by example and produced an all round telling performance, including a couple of assists from free kicks)