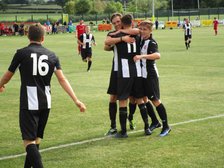 In the end, Flint did enough to maintain their 100% start to the season, but for long periods, they turned in a laboured performance.

It took a Denbigh equaliser with 15 minutes remaining to shake the Silkmen out of their lethargy, and to their credit they responded well to this setback, and scored twice in the final 10 minutes to secure the win.
The home side, shorn of several players through injury and suspension started the brighter, and enjoyed plenty of possession in the early stages without seriously threatening Josh Hart's goal. Flint manager Niall McGuinness kept faith with the same starting 11 that had served him well the previous week, but they were guilty of giving the ball away too cheaply to the opposition and were struggling to make inroads. Their best attacking moves were down the left side, but frustratingly the final ball was all too often wayward.
Nevertheless, somewhat against the general run of play, Flint opened the scoring on 17 minutes. Mike Williams, who had gone up for a corner, had possession of the ball just outside the box, when the initial danger had been cleared by the home defence. But he was bundled over on the edge of the box, and Mark Cadwallader curled a sublime free kick into the top corner, to take his personal tally to 3 goals in 2 games.
Flint came close to increasing their lead on 22 minutes. Luke Blondel was initially played through, and home keeper Craig Vernon pulled off a good save to deny him, which pre-empted a melee in the box as the loose ball was attempted to be seized upon by the Flint attackers, and the Denbigh defence were at full stretch to protect their goal, before Blondel finally put a shot wide of the target.
The closest Denbigh came to replying was five minutes before the break. Hart came outside of his area to attempt to clear the ball, but only succeeding in playing it direct into the path of Sam Downey, who was about 25 yards out in a central position. With Hart hoplessley out of position, and struggling to get back, Downey fired in on goal, but fortunately for Flint, Mike Williams was covering and headed the ball clear off the line. That galvanised Denbigh, and in the 44th minute, Jake Walker let fly with a long range effort, that Hart got down to, and safely collected at the second attempt.
A Flint corner, early in the second period, caused panic in the Denbigh rearguard, and as they struggled to clear a shot, Williams was first to react and looked odds on to score, until a last ditch block on the line prevented him increasing the lead.
Williams spurned another good chance, some 15 minutes later, when he got on the end of a long throw, but blazed his effort over the bar when well placed.
Although Flint were fashioning the better chances, Denbigh were enjoying plenty of possession, as Flint were sitting off them and inviting them on. Generally, the rearguard of the Silkmen were coping quite comfortably with the attacking threat, especially from corners, but it only needed one lapse to let the hosts back into the game, and that's exactly what happened on 75 minutes.
A ball was played across into a dangerous area from the right, and failed to be cleared, allowing Rhys Llwyd to latch onto it and unleash a fierce shot on the Flint goal. Somehow, Josh Hart pulled off a miraculous save to initially deny Llwyd, but unfortunately the ball rebounded back into the path of the Denbigh player and he followed up to crash the ball home. On the balance of play up to that point, it was probably no more than the hosts deserved.
But this new look Flint team have a bit of resilience in them, and this served as a much needed wake up call for them to up their game.
They hit back in style with a little under 10 minutes remaining, when they put together the move of the half. Substitute Jaques Welsh received the ball and ran into space on the left, before delivering a peach of a cross to Cadwallader, who had pulled away from his marker. He, in turn, cushioned the ball perfectly into the path of Kyle Smyth, and from around 6 yards out, the Flint striker made no mistake, to get off the mark for the season.
The victory was sealed shortly afterwards when Smyth was released to good effect. As he was forced wide, and towards the bye-line, he pulled the ball back to the supporting Aron Jones, who from an acute angle rifled the ball into the roof of the net. Smyth had made a couple of similar runs earlier in the half, but the difference this time around was that he had a player in support of him to take advantage of the opportunity, whereas previously he had no such options and was crowded out, as Flint's midfield were too deep.
It's a good trait to possess to be able to win whilst not operating at your best, and Flint can now go into next week's derby with Holywell in a positive frame of mind and with maximum points.

Flint MOM - Mark Cadwallader (on a day in which there wasn't too much quality on display, he produced the finesse that mattered, first with a well taken free kick and then with a vital assist for the crucial second goal)