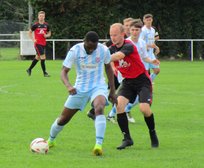 A one dimensional performance lacking creativity, especially in a poor second half, meant the Silkmen were unable to breakdown a resolute defence.

Kicking down the slope in the first period, Flint were generally the more accomplished side, but even so, direct efforts on the Penrhyn goal were few and far between, and the Roosters were always capable of causing problems of their own when they broke forward.
The first real chance fell to the home side after 21 minutes, when Tomos Evans was presented with a great opportunity, after Flint had failed to properly deal with a through ball. Debutant keeper Aaron Jones did well to come off his line and block the effort.
Shortly after, Kyle Smyth tried his luck from around 25 yards out, and home keeper Oliver Fairbrother scrambled across his goal to push the shot out for a corner. The Roosters' keeper has started the game somewhat nervously, but apart from that shot was never seriously tested, and his confidence grew as the game went on. He was also well protected by the centre half pairing of Jon Folingo and Sion James, who comfortably dealt with all that Flint could throw at them, especially from the countless corners and long throw ins they faced, which lacked variety.
Alieu Sheriff did well to win possession on the edge of the box on 34 minutes, and then broke into the area, was forced wide by Fairbrother, and from a tight angle pulled his shot across the face of the goal.
A minute later, home skipper Sion James found himself in space with possession of the ball, from a free kick. But his rising shot cleared the bar, when he should have found the target.
Four minutes into the second half, the Rossters grabbed the all important goal. A long ball played out to the right, caught the Flint defence in disarray. As the ball was crossed, Mike Williams attempted a headed clearance, but the ball fell into the path of Liam Lewis, who stroked the ball home.
Although there was still plenty of time left on the clock, a lack of variety in their approach, meant that despite all their possession, Flint never had a decent effort on target, as balls hoisted in the box were meat and drink to the defensive pairing of Folingo and James. Their best chance came on 80 minutes, when Jack Lewis seized on some hesitancy by Fairbrother on the bye-line, and won the ball which the keeper should have claimed. He rolled the ball along the line, and across the face of the open goal, but no one was arriving to take advantage.
This first defeat, preceded by two earlier draws means that we have now only taken 2 points from a possible 9 in our last three league games, and we have dropped into the bottom half of the table. With a home game against Ruthin coming up next week, we really need the win to get things back on track, but the Denbighshire side will be no pushovers.